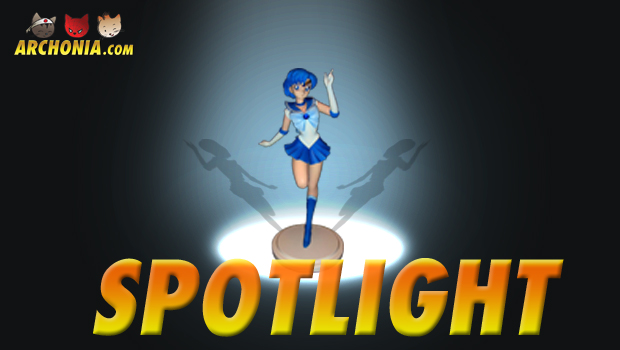 This week Sailor moon is in the Spotlight. We start off with a History of this immense popular franchise.

A history of Sailor Moon

One of the most famous Japanese animated series known is Sailor Moon. However, in Japan the official title is actually Bishoujo Senshi Seramun, which translates to Pretty Soldier Sailormoon.

With this series the Magical girl genre was revitalised and it became one of the most standard archetypes within the genre.

Writer and illustrator Naoke Takeuchi wrote the story for one character and wanted it to be a cute series about girls in space. It was the editor who proposed the sailor school uniform outfits. The proposal of adaption for animation resulted in the main character becoming a group,  establishing the image we have of Sailor Moon.

At first Takeuchi published the manga ***Codename: Sailor V, ***which focuses on Sailor Venus.  As mentioned before, the adaptation into an animated series resulted in Sailor Venus becoming part of the team. Also, the manga became a fusion between the popular magical girl genre and the Super Sentai series, a superhero team genre by Toei Co. Though the series was meant to involve only one story arc,  Takeuchi was asked to continue after its completion. Eventually the series spawned four more story arcs, which were published simultaneously with five corresponding animated series. Since the staff of the animated series consisted mainly of male staff members, Takeuchi often felt that the animated series had a slightly male perspective. The end of the manga series was to end with the death of the main characters. However, the editors asked her not to do that since it was a shoujo manga: manga for a teenage and young adult female audience. However, the animation does begin with the death of all main character, for which Takeuchi still holds a grudge since she was not allowed to do the same.

The first collection of Sailor Moon spans 52 chapters, also called acts, and 10 separate side stories. The chapters appeared as a serial in Kodansha’s monthly manga magazine ***Nakayoshi ***from February 1992 until march 1997. The side stories were serialized in Kodansha’s ***Run Run ***magazine. Kodansha also published all chapters and side stories in book form which consists of 18 volumes.

In 2003 the second collection, called the shinsoban or renewal edition, was a fact. Because of the live action adaptation Kodansha began redistributing the individual chapters, but with up to date dialogues and drawings including new characters that were introduced during the live action series.

Recently in 2013 a third collection was published. This Kanzenban, or complete edition, was published to celebrate the manga’s 20th anniversary. From November 2013 onwards, 2 volumes will be released every month The interior artwork has been digitally remastered, new artwork has been created for the covers, and color pages that were printed in the original will be featured as well in this collection.

Besides the manga, Sailor Moon was adapted into a 34 episode animated TV series, 3 animated movies, a 25 stage musical, a 49 episode live action TV series with two direct to video releases and 9 video games.

Check out the following at Archonia.com:

And of course more merchandise of Sailor Moon can be found on Archonia.com!