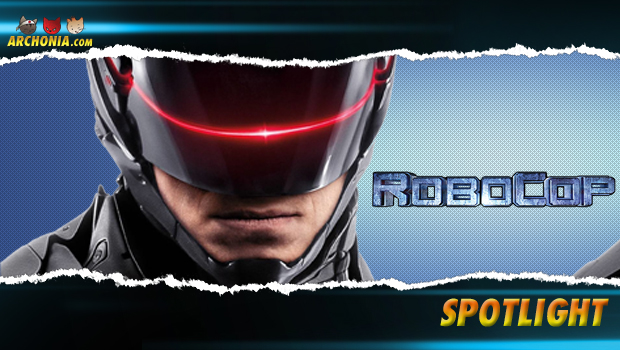 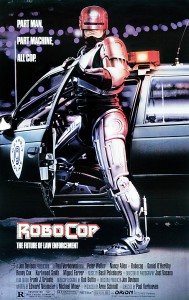 Set in a crime ridden Detroit, in the near future, the film centers on police officer Alex Murphy, who has brutally murdered by a gang of criminals, led by Clarence Boddicker. He is revived by the malevolent mega corporation Omni Consumer Products (OCP) as a superhuman cyborg law enforcer known as RoboCop.

On its release RoboCop received positive reviews and it was cited as one of the best films of 1987. It spawned a franchise that included merchandise, two sequels, a TV series, two animated TV series, a TV mini-series, video games and a number of comic book adaptations/crossovers. In 2014 the remake of Robocop will hit the screens. 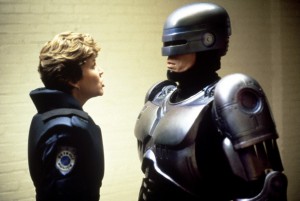 The story of RoboCop was written by Edward Neumeier and Michael Miner. According to Neumeier he walked past a poster of Blade Runner, and asked a friend what the film was about. His friend replied saying “It’s about cops hunting robots”. This concept sparked the idea for him about a robot cop. When Neumeier and Miner were attempting to pitch their screenplay to Hollywood executives, they were stranded at an airplane terminal. A high ranking movie executive was also stranded in that terminal. Their conversation about their project set in motion a series of events which eventually became RoboCop the movie. 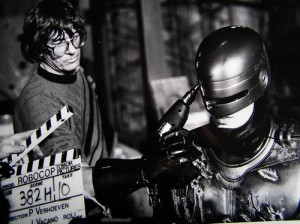 RoboCop marked the first major Hollywood production for Dutch director Paul Verhoeven, who left the Netherlands in 1984 to seek broader perspective in Hollywood.  The first time Verhoeven saw the script he discarded it in disgust. However, his wife picked the script from the bin and read it more thoroughly, convincing her husband that the plot had more substance to it.

The Character of RoboCop itself was inspired by British comic book hero Judge Dredd, as well as the Marvel Comics superhero Rom. In fact a Rom comic book appears on screen during the film’s convenience store robbery. Another Rom comic appears in the film during a flashback of Murphy;s son. 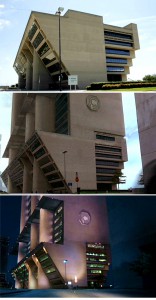 Before Peter Weller was cast, Rutger Hauer and Arnold Schwarzenegger were favored to play RoboCop by Verhoeven and the producers. However, they were both to big for the RoboCop suit, which was modeled on hockey gear.