Visit our booth at Antwerp Convention on 27 april 2014! 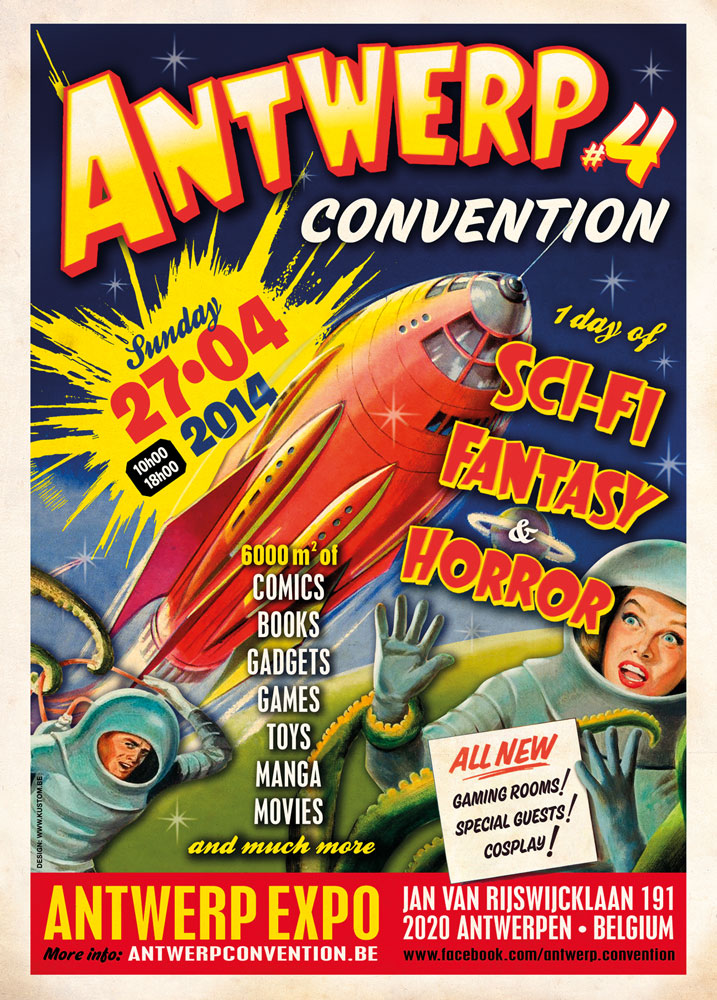 Archonia will once again be attending Antwerp Convention this year which will take place on Sunday April 27th in the Antwerp Expo. Opening hours are 10h00 to 18h00.

Our booth will be filled with toys, statues, merchandise, games, novelties and of course comics. Please take note, we will only be bringing a limited amount of the newest graphic novels.
For the first time we will also be bringing manga & anime items to the convention! So you can expect a huge booth again, Archonia Style! ^_^

This year we have, once again, invited a few special guests to liven up our booth!
No less that 3 comic artists will be sketching and signing and doing their thing at the Archonia booth during the day. We’ll also be assisted by a lovely cosplaying booth babe.

Who’s coming you ask? Well, without further ado, let us introduce our guests at the Antwerp Convention 2014!

Lee Garbett started his career in 2005, creating Dark Mist with Annika Eade and working on London Falling and Judge Dredd for 2000 AD. He then moved on to DC Comics were he worked on The Highwaymen, Midnighter and the DC/Wildstorm Universe crossover Dreamwar. Lee also drew the first arc on The Outsiders, entitled ‘The Deep’, and contributed to the new Batgirl relaunch in 2009.

Garbett provided the art for the two-part Batman story which follows the Batman R.I.P. storyline and links into Final Crisis. He provided pencils for the sixth and final issue of Grant Morrisson’s The Return of Bruce Wayne.

These last few years Lee has worked hard with establishing the highly return of Valiant Entertainment where he worked on their flagship title X-O Manowar. Presently, Lee is doing the interiors for the brand new Marvel Series: Loki, Agent of Asgard.

Jock began his career in 1999 as an artist and writer for the British science fiction comic magazine 2000 AD. He worked on series like Judge Dredd and Lenny Zero, the latter with writer Andy Diggle.

It was with Diggle that he got his big break in America at DC Comics’ Vertigo imprint, working on Hellblazer, The Losers, Faker and Green Arrow: Year One. Following his run on Green Arrow, he got to show off his talent on the main DC universe titles, in particular two storylines on Detective Comics, the first featuring Batwoman and the second Batman.

Jock is a prolific cover artist with a distinctive style. He has produced covers for several titles across all major publishers.

Jock has also contributed concept paintings and key art to a number of film productions and promotional campaigns. These include Hancock, Batman Begins, X-Men: Days of Future Past and many more! He was the principal Concept Designer on Dredd – contributing script breakdowns, story layouts and full concept art for the costume and city designs.

Romano has been active in the comics industry for many years now and has worked on projects such as Storm, Witchblade, Darkness and Birds of Prey for DC Comics!

Romano will doing sketches (prices displayed at the convention) and selling his very own art book and also original art. There’s a list where you can sign up for a sketch and you can then come and collect your sketch later on.
Sketch options are:

Romano is not accepting pre-con commissions due to time restrictions.

To check out Romano’s work, you can visit: