Guardians of the Galaxy : Star-Lord 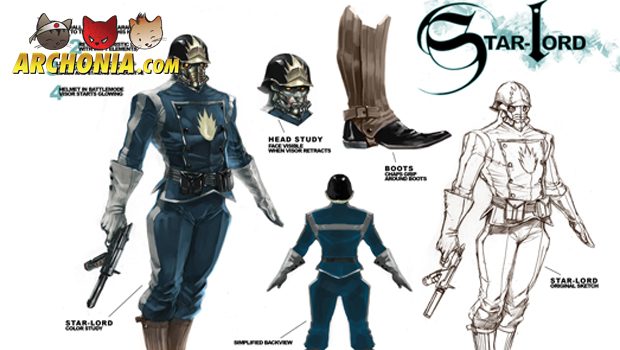 Lets kick off with Peter Quill, beter known as Star-Lord. 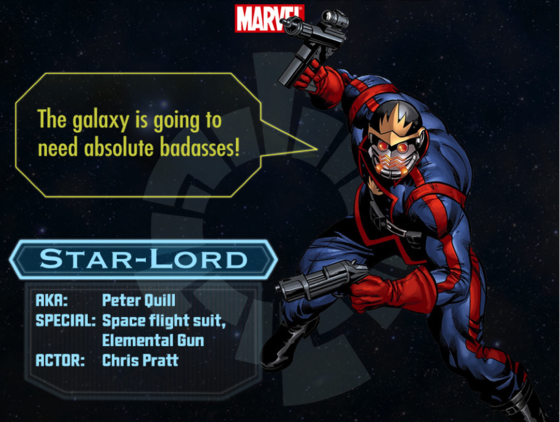 Peter Quill is a half-human, half-Spartoi hybrid. He’s not exactly your squeaky clean hero: As an astronaut with NASA, his drinking and cockiness regularly get him into trouble.

He becomes outraged when, while working aboard a space station with a few others, the alien known as The Master of the Sun offers the role of Star-Lord to a coworker Peter had spent his time treating badly. NASA orders him discharged, and in a drunken rage, he steals a scout ship and, returning to the space station, lies to take his colleague’s place.

During his time as Star-Lord, he cleans up his act, letting his braver, more noble qualities surface and, realizing the galaxy needs absolute bad-ass heroes to protect it. In this moment he creates the Guardians of the Galaxy.

No magical hammers or flying shields here, Star-Lord is 100% blazing guns and hand-to-hand combat. He’s a master strategist, and an expert in all forms of martial arts, which is great, as he’s often in the position of showing it to someone. Still, he’s welcomed almost anywhere in the galaxy, as he has an almost encyclopedic knowledge of the customs, languages, and traditions of various alien races. The fact he has a psychic link to his sentient spaceship, called – wait for it – Ship, probably helps. Basically, he’s the Doctor (as in Doctor Who), except he definitely loves guns and doesn’t mind getting his hands dirty. His guns: Kree “element guns” that project bullets made of the four elements. His signature look is more Kree tech: His mech suit enables him to fly and survive the atmosphere of deep space, along with the battle helmet and universal translator.

In essence Star-Lord, as the leader of the Guardians of the Galaxy, is unpredictable, rebellious, brilliant, wildly entertaining, and, basically, he should be your new favorite hero.

In Marvel’s Guardians of the Galaxy, Star-Lord will be played by Chris Pratt: 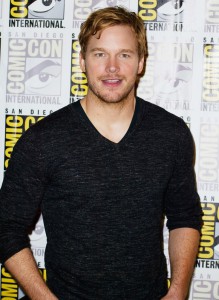