Guardians of the Galaxy : Rocket Raccoon 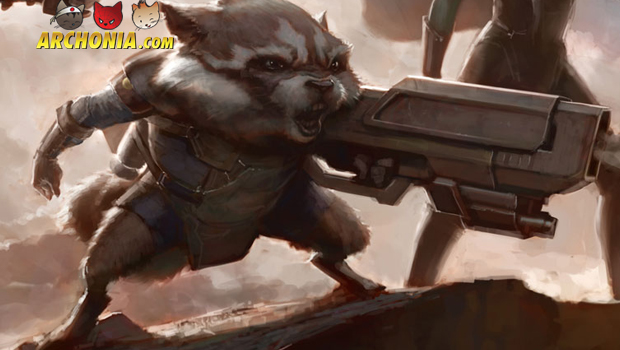 Today we have Rocket Raccoon! 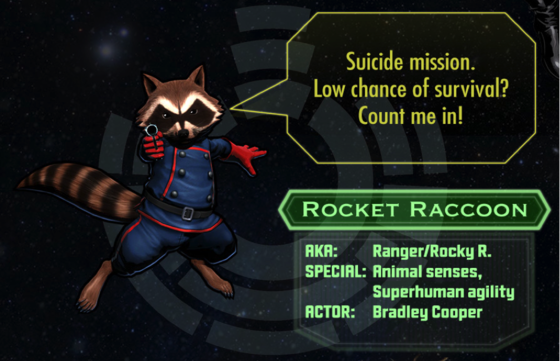 When Marvel debuted it’s hastily thrown together, super rough Guardians of the Galaxy footage at last year’s San Diego Comic-Con, Rocket Raccoon was by far the fan favorite. Everyone else that wasn’t at Comic-Con thought: “Really… a talking raccoon?” But there’s a reason Rocket solidly won over fans and it is simple: He is a bona fide, 100%, walking, talking, gun-toting BAD-ASS.

Rocket is brilliant, a master military tactician and marksman who was Halfworld’s (his home planet) chief law officer, the captain of his starship Rack ‘n Ruin, and he kept the peace in his lawless end of the universe before joining up with the Guardians. He is utterly fearless, often insightful, and very loyal. And when there’s some murderin’ and killin’ to be done, Rocket is the Raccoon for that….

Yes he’s also a little crazy. Other than probably having obsessive-compulsive disorder, and constantly making jokes about how much he loves murdering people, there’s a whole lot more than meets the eye to the little guy. See, Halfworld was originally a planet asylum for the criminally ill (Arkham, if Arkham were an entire planet), where all of the animals of the planet were genetically modified to be hyper-intelligent and walk upright to oversee the inmates. As you could imagine, being ripped apart and put back together left more than a few scars, and so, underneath all that loyalty and intelligence, is some bottled-up, simmering rage. In fact, director James Gunn calls Rocket Raccoon the heart and soul of the Guardians of the Galaxy for that reason:

“He is most representative of the Guardians in the fact that he’s this little mangled beast that was taken and experimented on and torn apart and put back together, and we have to feel that character’s soul. If we see his plight, and see why he’s such an angry little guy, then the movie will work.”

If you love the character of Wolverine, then you need to get on board with Rocket, because he has many of the same motivations driving him beneath the surface as our adamantium-clawed X-Men hero, with an equal love of putting boot to ass, but a better knowledge of weapons and spaceship piloting.

Trivia #1: Rocket Raccoon was a nod of tribute to The Beatle’s song ‘Rocky Raccoon’.

Rocket Raccoon will be voiced by Bradley Cooper as mentioned. 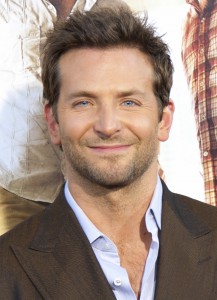