Guardians of the Galaxy: Gamora 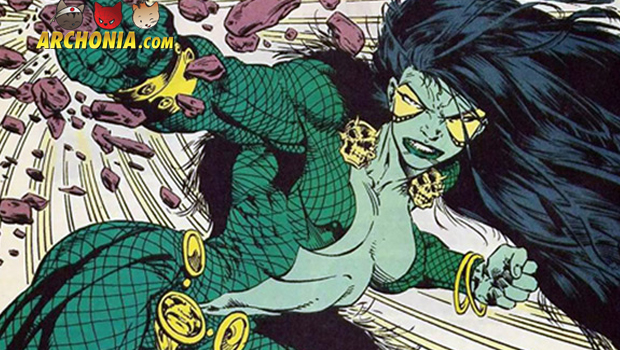 We are still 5 month away from the release of Guardians of the Galaxy. But who are these Guardians?

This week we will present you the character sheets of each character as followed:

Today we will introduce Gamora!

Guardians of the Galaxy: Gamora

Having been called both “the deadliest woman in the universe” and “the most dangerous woman in the galaxy,” those nicknames aren’t just hyperbolic. Gamora is a trained assassin and one of the most skilled martial artists in all of the Marvel Universe. 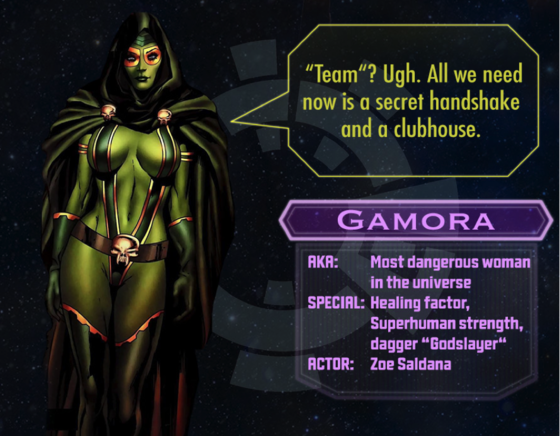 That isn’t to say this all came easily, however. Unless the rest of the Guardians, who were mostly rogues and scoundrels before joining up with Guardians of the Galaxy, Gamora was a true villain, adopted as a small child by the supervillain Thanos when her people, the Zen Whoberi, were wiped out by the Badoon. It wasn’t love that propelled Thanos‘ actions, however, but an opportunity to turn Gamora into the most perfect weapon in the galaxy.

Raised with very little love or affection from her adoptive father, but a whole lot of training in the art of wetwork, Gamora became an expert of both blade and hand, relentlessly trained by Thanos in hand-to-hand combat, the known martial arts of the galaxy, weaponry of all species (particularly her enhanced dagger, “Godslayer”), and stealth techniques. Later, when disobeying his orders as a teenager and sneaking off, Gamora found herself surrounded by thugs, overpowered, raped, and left for dead. When he found her, Thanos decided to cybernetically enhance her with bionic implants, granting her superhuman strength, agility, and superenhanced healing abilities, making her even deadlier.

Even with this lack of love or familial feeling, Gamora nonetheless possessed a fierce sense of loyalty for her adoptive father…that is, until the aftermath of a near-death experience showed her that Thanos was obsessed with committing genocide in an attempt to rule the galaxy.

After a time, Gamora joined up with the Guardians of the Galaxy, but she wasn’t exactly what you’d call a team player, instead often preferring to play by her own rules. Despite her sometimes prickly, hardened nature, Gamora joined the Guardians because she felt she had no purpose and wanted to do something for the greater good of the universe. However, it took quite some time for the rest of the Guardians to open up and trust her due to her past. It wasn’t until she essentially sacrificed herself to save the Guardians, burning herself up from head to toe within a star, that they finally started to accept that perhaps she had truly set her evil past behind her.

Trivia #2: Gamora’s origin/childhood story is similar to She-Ra’s, who was kidnapped by Skeletor from her crib and raised in the ways of evil until she was 18, when her twin brother, Adam/He-Man, met her for the first time and slowly helped her find redemption.

Gamora will be played by Zoe Zaldana: 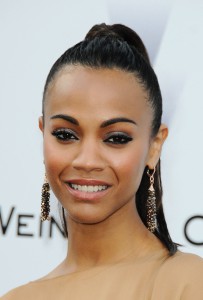