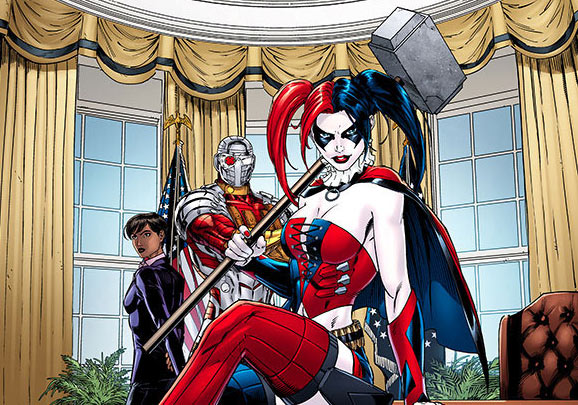 **Each September DC celebrates the anniversary of The New 52 and they run a special during the entire month.**In September 2014 there will 41 one-shots each available with a special 3D cover or a standard cover. There’s always a lot of buzz around the event and issues sell out quickly! In fact, these books are often sold out through preorders before they hit the shelves! This means that preorders are now even more important than ever!

It’s 35 years in the future, and the world has gone to hell. In the new weekly Futures End title, Terry McGuinness, aka Batman Beyond, travels back in time to try and prevent this from happening, but finds that the wheels are already in motion.

Enter the 41 Futures End #1 issues releasing in September! These special one-shot collectors’ issues are available in 3-D Motion Cover and Standard Cover versions. Each issue will give readers a glimpse into the possible futures that await our heroes. Unlike the Villains Month issues of 2013, these new Futures End issues are the result of current plotlines played out to their fruition, so you don’t have to be reading the weekly Futures End book to enjoy the fun!

But here’s the catch: we as a comic book shop, have to place our first and FINAL order for these titles at the end of this month. Yes, that’s right. In as early as May we have to preorder these one-shot #1′s for release in September. Well before the media hype even begins and the general public is even aware of what’s coming. With last year’s Villians Month the 3D Covers were short in supply and many people were dissapointed that DC could not fill their orders. Therefor, they have now put the liability with the shops. They just print what we order and that’s final.

That is why we’re asking you to place your preorders NOW! Do this before May 27th so that we know how much we should order to fill the orders for our loyal customers. Of course we’ll be ordering extras for when the hype builds up, but remember orders are filled on a first-come first-served basis and we don’t want you miss out on these special collectors’ issues! So make sure your preorder is in on time and we’ll make sure you’ll get the one-shots you want.

We know you’re eager for cover images, but DC simply has not revealed them all yet! This is just adding to the insanity! We’ve found several cover images and updated the corresponding articles. If you check the 2 sample images of each item, you can see what the cover image will morph into when you tilt the comic. They did promise to release all the cover images before the order deadline…
We’ll be updating our site as soon as they become available, but chances are this will be just before or on the 27th.

Ready to jump aboard?

AQUAMAN AND THE OTHERS FUTURES END #1 (3D COVER)