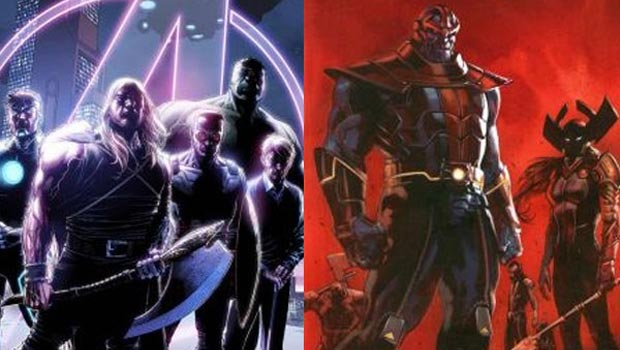 This September, Jonathan Hickman’s Avengers #35 and New Avengers #24 are going to jump ahead 8 full years in Marvel’s time line, kinda like DC’s line wide Futures End event also this month. What sets it apart from DC’s approach to doing the flash forward time travel thingy is that Marvel is foreshadowing the possibility of a complete reboot of their 616 universe, since they say this future is not a “what if” story, but will actually come to pass next year!

Why could a reboot actually happen? Story wise, I mean.
Well, as readers know, Hickman’s Avengers and New Avengers run deals with the threat of so called incursions, which involve other realities and parallel earths forcing their way into the 616 universe. The only way to handle them: destroying the other earth or both universes will perish. Therefore, it is not entirely impossible that this story could be used as a way to “kill off” the current Marvel universe and rebirth it as a new one, with less continuity baggage and therefore an easier entry point for new readers, like the New 52 did it before. Maybe Marvel could even reboot their universe in a way that it resembles the Marvel cinematic universe even more, to bring both mediums more in sync with each other (maybe changing something about the Mutants, to fight against Fox’s hold on the X-Men movie franchise?). 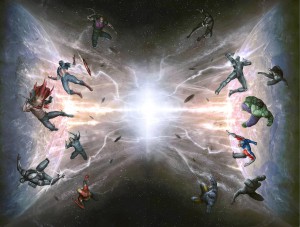 The two fast forward issues in September are showing the fate of the Marvel universe 8 years into the future, which we will get to witness in the event Time Runs Out. the Time Runs Out event starts in April 2015 and Marvel said the following about it:

“Time Runs Out sees everything Jonathan Hickman has been building towards comes to a close and will affect the entire Marvel company across the board, forcing them to do something the company has never done in its 75 years.”

Do I think there is going to be a reboot? Maybe. I am really not sure.
When we take a look at DC’s New 52 reboot we see that it had pros and cons. I overall liked the reboot there, but still miss a few of the old characters and continuity. A lot of books that struggled a lot before the New 52 really benefited from the fresh start (Aquaman, Wonder Woman, Animal Man haven’t been that good in years, maybe decades), some stayed in the same quality level (most Batman books, Justice League, Green Lantern etc.), while some kinda fell flat (Superman, Superboy, Teen Titans and a lot of the more obscure books to name a few).
The whole line of DC Comics got a huge sales boost, thanks to the reboot that is still felt today in some of their series. They gave a lot of newcomers a great starting point, but they also alienated a few of their longtime fans by removing characters or stories.

The great thing about Marvel’s answer to the New 52, Marvel Now, was that they could have their cake and eat it too! They sorta rebooted everything, upped the quality of a lot of books by exchanging the creative teams, gave people a good entry into their books AND kept continuity of almost 75 years of stories. So I really don’t think Marvel has to do a reboot at all, which doesn’t mean that it won’t be awesome if they still do it!

Its all about execution, I guess. No matter how it is going to turn out, I will be on the front line of it and enjoy the ride.