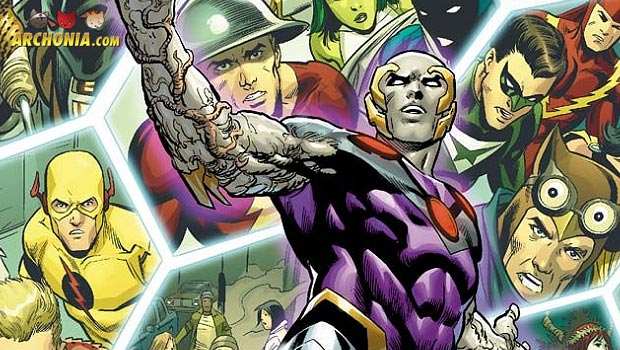 The event will be a weekly series that starts on April 1st with issue 0 and ends with issue 8 on May 27. Next to that there will be 40 2 part mini series for April and May, which are going to replace all normal ongoing series (like “Batman”, “Justice League”, “Constantine” etc.) for those two months and tie-in with the event. Only Grant Morrison’s Multiversity and digital first comics will not be affected from that hiatus.

The story will open up the multiverse again when Brainiac decides to place all the cities he has stolen from different planets and different dimensions on the same planet just to see what happens. Also a mystery villain named Talos (pictured above) will play a part in this story.
The main story will be written by TV veteran Jeff King (Stargate, White Collar, Continuum) with some help by Scott Lobdell, while the 40 mini series aren’t announced yet.
This is King’s first time writing a comic book, which is a concious decision by Didio to make sure the event is new reader friendly and not a trip only veteran readers and writers will understand.

The most intriguing thing about all of this is the fact that Dan Didio calls this the most meta DC event ever and that this will show that all DC stories, even those of the pre New 52 timeline have happened somewhere in the DC multiverse. What that could mean is that we might see a few pre New 52 characters again, like maybe Donna Troy, Cassandra Cain or Superman with his underpants on the outside of his costume again. It could even lead to the return of a lot of pre New 52 stories and continuity or even the start of a few ongoing series in that older timeline! Who knows!?

While the 2 month hiatus of the normal ongoing series is a bit of a letdown, it is clearly a move by DC to make time for their move across america from New York to Burbank where DC Comics is finally going to share an office building with DC Entertainment proper, which is a good move for the company.
Overall we are excited for this and the possibilities it holds. How about you?