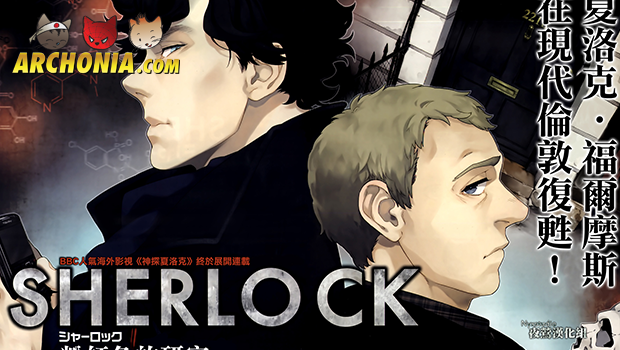 The manga of BBC’s Sherlock television series returns! This was announced in the November issue of Kadokawa’s Young Ace magazine. Artist ‘Jay.’ Is once again drawing the manga which launches in the December issue.

A Study in Pink & The Blind Banker

The Japanese Sherlock mangas adapted the first two episode of the BBC series. The first volume ‘A Study in Pink’ was released in 2012 and features the storyline of the first episode. The second volume ‘The Blind Banker’ was released last year. Kadokawa Shoten published a compilation of these volumes.

The BBC series is written by several Doctor Who scriptwriters (Steven Moffat, Stephen Thompson and Mark Gatiss). They took Arthur Conan Doyle’s intelligent but quirky detective and re-installed him in present-day London. Benedict Cumberbatch (Star Trek: Into Darkness, Tinker Tailor Soldier Spy, Atonement) and Martin Freeman (The Office UK, The Hobbit and The Hitchhiker’s Guide to the Galaxy) play the leading roles as Sherlock Holmes and his good friend Dr. Watson respectively. So far the show has three season of three 90-minutes episodes. The fourth season will premiere in 2016.

The iconic detective has inspired others as well. Several mangas and animes have been made before, including a younger version of Sherlock called Sherlock Holmes whispers to the shadow, and a canine detective called Sherlock Hound, which is co-directed by Hayao Miyazaki.