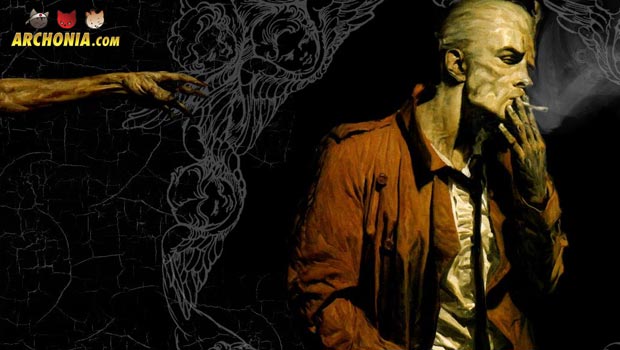 With DC’s premier magic dealer and chain smoker finally making his way into live action with the recently started “Constantine” TV series (no, the Keanu Reeves movie does not count) it is finally time to give comics’ coolest magician the attention he deserves… and believe me, he deserves a lot.

John Constantine was created by Alan Moore as a side character in his seminal Swamp Thing run in the 80s. Moore’s idea was to create a blue collar, street wise type of magician who is more edgy and interesting than the other magic archetypes which appeared in comics up until then, like for example Doctor Strange or Zatanna. A complete douche bag, con man and master manipulator who almost never makes his own hands dirty and pop star Sting look-a-like, was the result. Oh and also giant pain in the butt for old Swamp Thing.

Alan Moore, who declared himself openly as a ceremonial magician, even reported that he truly met his creation in a pub once. 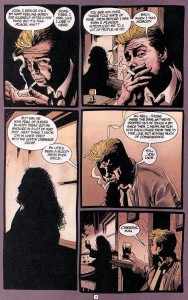 “One day, I was in Westminster in London — this was after we had introduced the character — and I was sitting in a sandwich bar. All of a sudden, up the stairs came John Constantine. He was wearing the trenchcoat, a short cut — he looked — no, he didn’t even look exactly like Sting. He looked exactly like John Constantine. He looked at me, stared me straight in the eyes, smiled, nodded almost conspiratorially and then just walked off around the corner to the other part of the snack bar.”

“I sat there and thought, should I go around that corner and see if he is really there, or should I just eat my sandwich and leave? I opted for the latter; I thought it was the safest. I’m not making any claims to anything. I’m just saying that it happened.”

Hellblazer – From Sandman to Solo Series

John continued his adventures through Neil Gaiman’s masterpiece “Sandman” into his own solo ongoing series “Hellblazer” (because Hellraiser was already taken), that debuted on the then newborn DC mature readers imprint Vertigo Comics, which in turn allowed him to up the ante on swearing, smoking, sex and all out horror in a way comics had rarely (if ever) seen before. 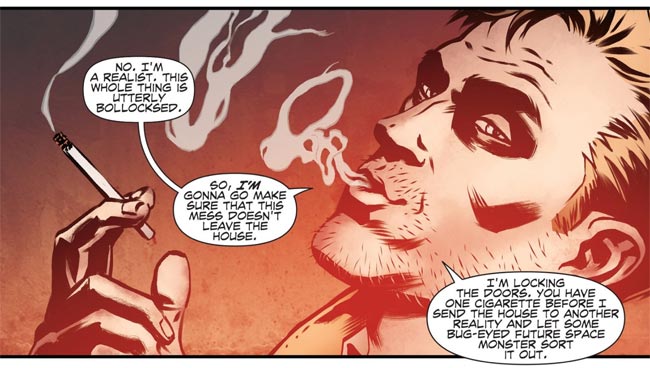 Hellblazer was a book that had bark and bite, that was willing to be edgy and uncomfortable, to push its readers into very dark territory. It mixed supernatural and real life horror, contemporary gothic with noire, surrealism and occult detective fiction elements to get its points across. The story usually followed John through his demonic exploits to “take the piss” from heaven and hell up until 2013 when the book was sadly cancelled at issue 300.

The character aged in real time, which is a rare thing in comics, and only demon blood in his veins kept him from showing his true age. He takled everyone from the devil himself to vampires, neo nazis, serial killers, the ghost of Sid Vicious and even the Royals themselves, but smaller hauntings and excorsims weren’t below him either. The book was also influenced by a lot of social commentary over the years and therefore one of the most intelligent reads you could have in a comic, if you were willing to look behind the methaphors of demons and monsters and see the real life reflections they stood for a lot of the time, like the Thatcher regime of the 80′s, or the War on Terror.

Who is this John Constantine really?

Constantine is a bastard and everyone around him dies. Mostly because of his own hubris and a total lack of knowing when to back down. Every single win on Johns part has wide ranging side effects that often hurts people around him, turn victory into tragedy and end with the character trying to make something good out of his life at the end of it again, which turns him over the course of the 300 issue run into a pretty cynical, sometimes almost nihilistic protagonist.

He truly is one of comic’s most interesting characters ever, especially in his Hellblazer incarnation, since this is the rawest and unfiltered version of John.

“[Hellblazer] retains the occult connections, but what sets it apart from the sad, played out “dark fantasies” that you’ll find on the shelf next to it is its clear knowledge that real horror is perpetrated not by eye-soiling pantomime monsters, or pale things in black with stupid names. Real horror comes from people. Just people. They’re the scariest things in the world.” 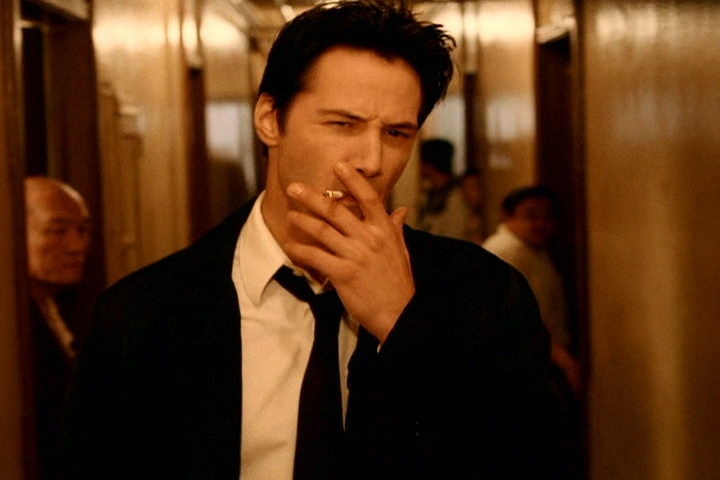 The quickest way to actually show how the comic version of Constantine is not, is to look at the Keanu Reeves movie, where they turned a british manipulator who almost never fights physically into a white version of Blade. The movie is fine on its own, but as an adaptation its almost as far removed from the book and the core of the character as you can be.

When “Hellblazer” was cancelled DC Comics made John a part of their regular DC Universe again, just like he had been before Hellblazer started. As part of their New 52 relaunch they reintroduced him back into the superhero universe as part of the “Justice League Dark”, where he and his team take care of the magical dangers the normal Justice League is not equipped to handle. He also has his own solo series again in New 52′s “Constantine” which shows his life outside of the JLD. Sure, New 52 Constantine doesn’t swear as much anymore and is a tiny bit more heroic, but overall his transition has been handled well and he is now one of the main players of the DC universe when he takes part in big crossover stories like “Trinity War” next to Batman and co. 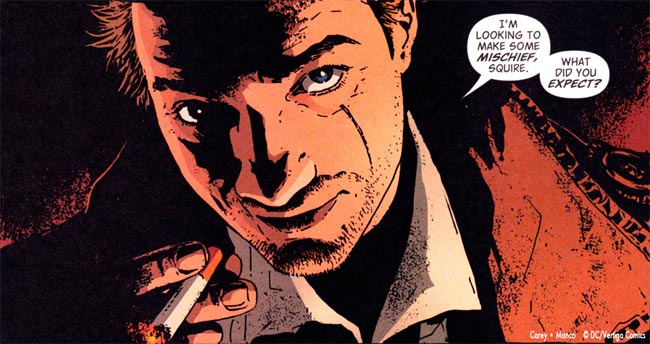 From comic books pages to the television screen 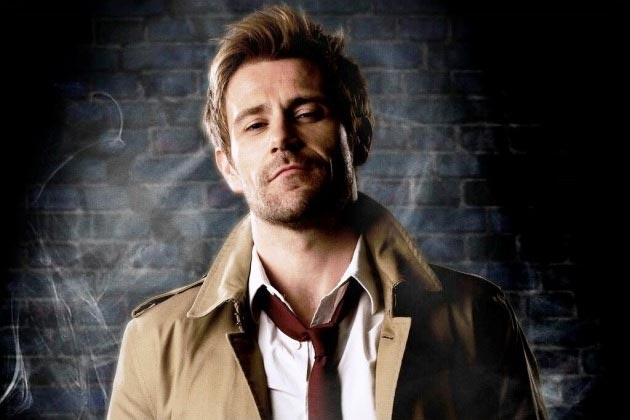 2014 was the year where it finally happened. John Constantine made his way onto network television with NBC’s “Constantine”, which is a crossbreed out of his Hellblazer self and his New 52 version. He is not allowed to use any F-bombs and cannot be shown inhaling smoke directly (don’t worry, they still show him smoking as much as they can and they do handle that slippery slope of US network rules very well), but the stories are much more “Hellblazer” influenced thus far and producer David Goyer promises that this is the way the show will go.

At the time of writing this article, only two episodes have been aired and apart from it being set in the US (which is kind of a requirement for it to make it onto US TV I guess), this Hellblazer fan is really happy with it. The casting of Matt Ryan as John Constantine is pitch perfect, because he not only captures the look of the comic character perfectly, he has the right accent and the right cocky demeanor that brings John to life outside of the page for the first time.

Obviously I think anyone who is remotely interested in horror themed stories should check out at least one of John’s many incarnations (Hellblazer especially) and DC has made it pretty easy right now to get onto the Hellblazer train from the start, since they are currently reprinting the whole 300 issue run in newly designed tradepaperbacks (which are currently on vol. 9). The New 52 Constantine solo series has several trades out now as well and so does the team book Justice League Dark.

While you make your reading choice I will be gone back into darkness, leaving only a nod, a wink and a wisecrack. Cheers. 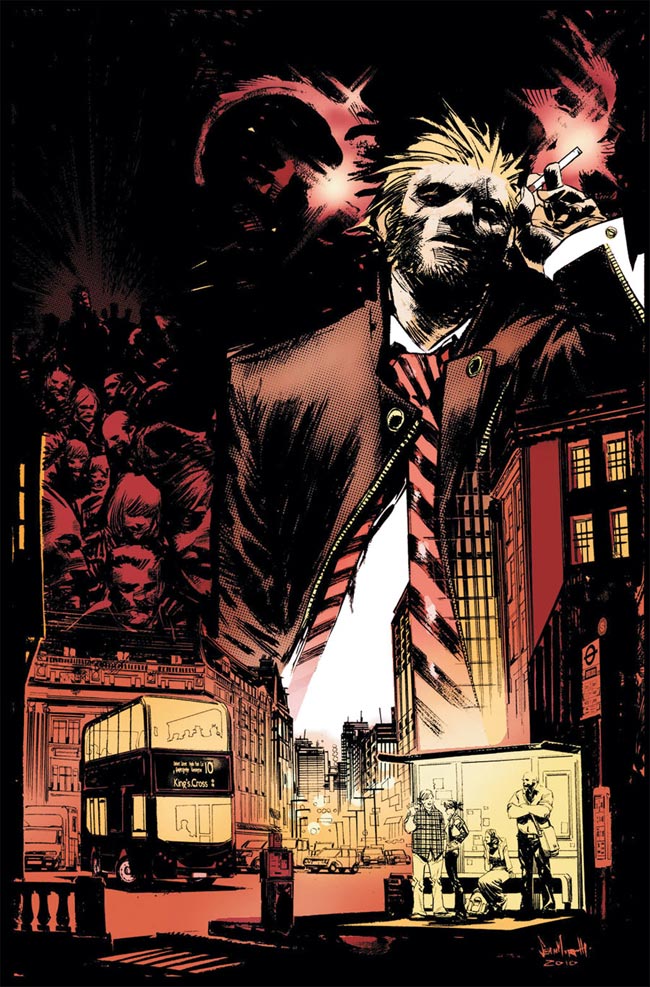