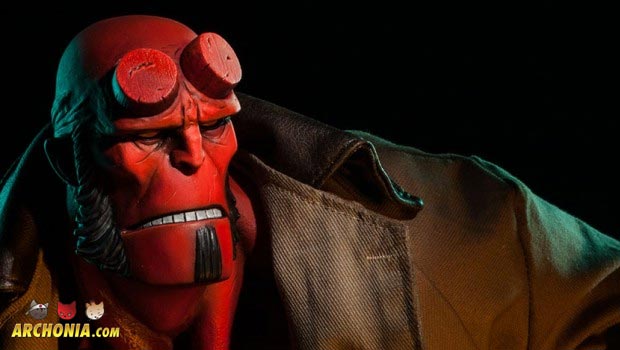 The Hellboy Premium Format Figure from Sideshow Collectibles has finally arrived this week, so we thought we take a look at it and let you know what we think.

Hellboy was created by Mike Mignola in the early 90s and has endured two decades at the speartip of the indy comic book world. This hell born demon hunter fights against demons, witches, creatures from folklore, vampires and everything that goes bump in the night.

This statue depicts Hellboy in his comic book version and not the Ron Pearlman version you might know from the movies. He stands at 58 cm tall, weighs about 6.8 kg. Let’s get into it.

The sculpt from Matt Black and Nathan Mansfield is fantastic. From the detailed (occult etchings and runes on the bottom piece) graveyard style base, which features a snake and a frog as bad omens of evil, to the horned demonology expert himself, everything is top notch. You can even see small cuts all over his body which show the battle damage he has endured in all his adventures. The pose, the body (especially the skinny legs), the right hand of doom and his head sculpt are just oozing Mike Mignola’s influence. He really looks like he stepped right out of the comic and is truly one of, if not THE closest any Sideshow piece has ever come to capturing the style of any comic book artist ever. Amazing really.

The paint work on Hellboy is very well done. The red is just the right shade of red and there are no imperfections to be found. The base has a more subdued color palette to make the red boy pop out even more. The only thing that doesn’t match the comic 100% is the eye color, which is here more of an orange, while it’s more of a yellow in the comics. The orange does fit this statue very well though and does not detract at all from the piece. It gives him an even more ominous vibe.

Hellboy’s black short pants are fabric and look really good. The belt is made out of faux leather and the pouches on it are adjustable, so you can display them better in the front of the statue. It is highly detailed and even features a tiny crucifix. But the show-stealer… woah, the show-stealer is the coat. The fabric is the right color and texture and it fits the statue perfectly. From the faux leather collar on top to the dirt effect on the bottom of the coat, the details are just spectacular. The famous B.P.R.D. logo is also featured on the right shoulder of it. To top it all off the coat is lined with a lot of wires, which are not visible from the outside. This makes it possible to actually pose the coat in any way you want, to make it look like Hellboy just pounced onto the gravestone ready to fight, or is standing there overlooking the scenery while the coat is flapping in the wind. It’s really stunning.

With the Sideshow Hellboy Premium Format Figure you actually kind of get two statues in one. Why? Well, because of awesome switch out parts, one extra head and one extra left hand.
If you take off his coat and add the head with the long unshaven horns and the in smoke bathed floating crown and also add the hand with the sword you don’t have regular Hellboy anymore… but stare at the hellish image of Anung Un Rama, Hellboy’s evil version which fully succumbs to hell and brings with him the apocalypse. Can you spell AWESOME?

All in all, this is a stellar piece from Sideshow and one of their best statues ever. There is really nothing to moan about and if you are a statue collector AND like Hellboy and/or Mignola this is a must have. Order it while you can, because this one is surely going to sell out soon! 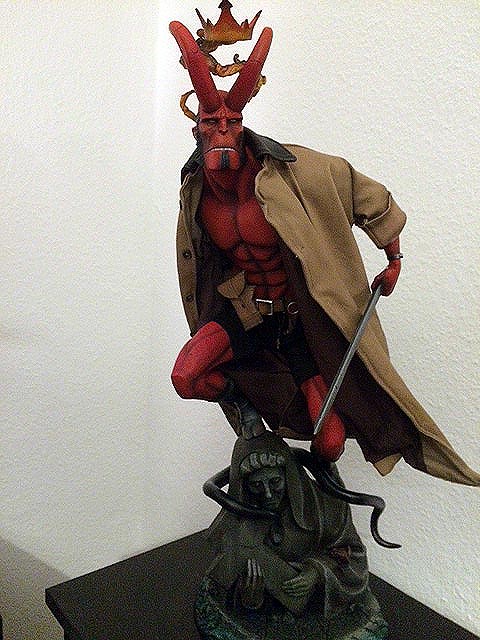 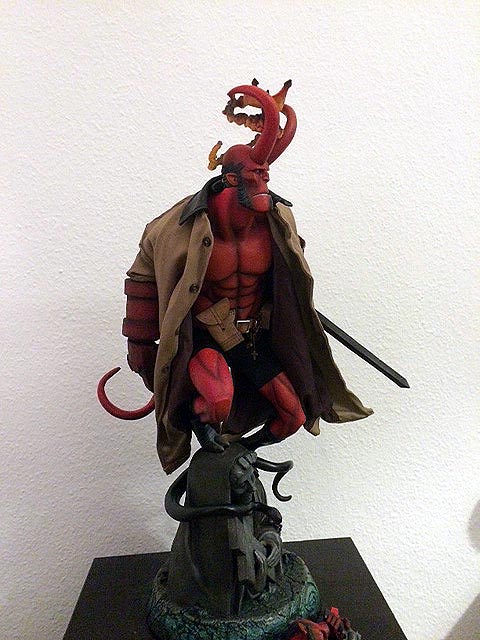 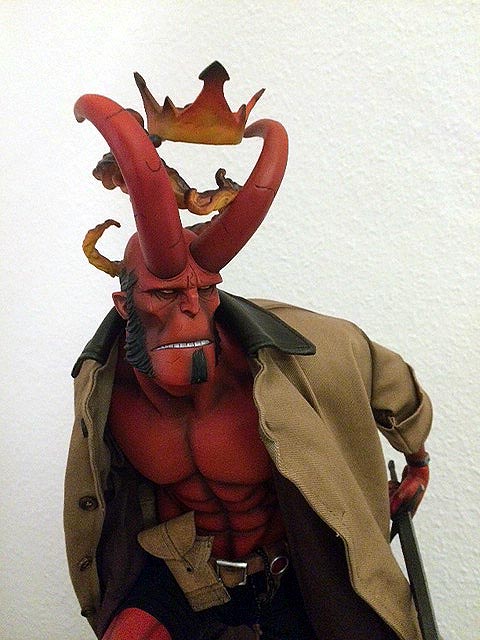