Archonia is going to Antwerp Convention and we're bringing some artistic friends with us! 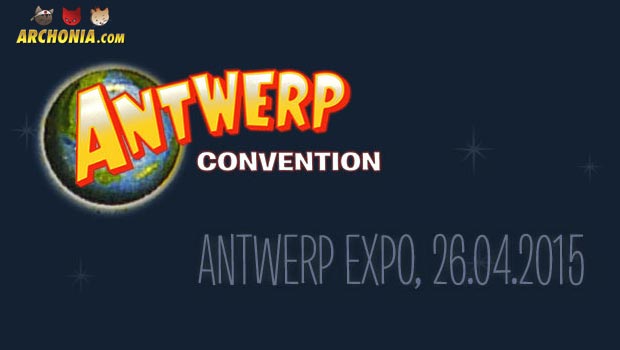 First off, we want you ALL to visit us at the Antwerp Convention this year, which will be held on Sunday April 26th in the Antwerp Expo in Antwerp, Belgium.
We will have a huge sales booth filled to the brim with graphic novels, manga, anime, statues, POP Vinyl figures, boardgames, cardgames and more! You will very easily spot us when you enter the dealer hall and look to your left. Trust me, you will not miss us!
We are also once again offering the free pick-up @ Antwerp Convention shipping method. You can now place orders online and choose for that completely free shipping method. We will then pack your purchased goods neatly and bring them with us to our booth at the convention where you can come and pick it up anytime during the day. We do suggest you limit yourself to in stock goods, because if we have to fly them over from the USA, they might not get here in time anymore.

At Antwerp Convention we will also be carrying on the tradition of inviting some of our artist friends and giving them some space at our booth.
This year we have invited some very cool people again and we’re very proud to announce them here to you now:

Paolo Pantalena is an Italian comic book artist. Inspired at the age of 13 by Todd McFarlane’s Spider-Man art, he later drew on numerous influences such as Joe Mad, Jim Lee and Marc Silvestri. Paolo’s style has progressed into a uniquely innovative expression in itself. Known for an abundance of rich details, Paolo’s artwork is eye-catching and addictive.

His first published work from and American publisher came from Zenescope’s Sinbad, followed immediately by Marvel with What If?, What If?: House of M, War of Kings and War of Kings: Darkhawk for which he collaborated with Havery Tolibao. His attention to detail caught the eye of Marc Silvestri at Top Cow where he did work on Witchblade, Darkness and Epoch. He has produced numerous exclusive covers for Zenescope and Aspen Comics including Fathom, Kiani, Soulfire and Jirni.

Paolo is currently working for DC Comics as sequential artist while he still collaborating with Aspen comics, Zenescope entertainment and Lady Death comics as cover artist on monthly basis.

Paolo is accepting pre-show commissions for which prices can be found on his website.
Additionally he is offering grayscale copic commission A4 size for 250 euros (one character full figure, with minimal background). If you are interested in a pre-show commission, feel free to contact Paolo
through his Facebook page or via his website.

He will also do commission sketches at the convention, most likely on a small size paper, as many as time permits. He will also have his sketchbook with him and will offer it for 70 euros with an original copic artwork (mini commission) inside.
Besides that option, he’ll do A4 copic sketches for:

Autographs will be free of charge as far there will be 5 or less comic to sign per person (then he’ll ask to purchase at least a print). There will be prints, sketchbooks and original arts for sale.

Barry Kitson began his professional career in the 1980’s, working first for Marvel UK on Spider-man and Transformers. He then worked for 2000AD drawing both Judge Dredd and Judge Anderson before hopping the pond to the USA to work for DC Comics for whom he drew many of their flagship titles including, The Adventures of Superman, Superman & Wonder Woman, Batman, Justice League of America Year One, Azrael, The Flash, The Brave & the Bold (featuring Green Lantern and the Flash) and The Legion of Super-heroes. Subsequently Barry’s work was seen at Marvel Comics where he has drawn most of their iconic characters including The Amazing Spider-man, The Fantastic Four, The Avengers, The X-Men, The Order, Fantastic Four: Secret Invasion, Iron Man: Public Identity, The Incredible Hulk, and The Mighty Thor. He also worked at Valiant on Harbinger and Bloodshot. Currently Barry is delighted to have renewed his working partnership with Mark Waid at IDW (in the USA) and Delcourt (in France) returning to their acclaimed creator-owned series Empire.

He will be at the show all day sketching. Sketch prices are:

He will also do 5 minute headshots at the show for free for anyone who waits in line. Only people wanting free sketches need stand in line, if you sign up for a sketch you can return later on the day to collect it.
Barry can and will also prepare as many as he can before the show if people contact him with the characters they want and pay in advance. He will do them in the order money is received. These are still convention type sketches rather than full commissions as he doesn’t have time for any full commission pieces as such. Payment in advance is by Paypal or by cash or PayPal at the show. Any pieces not completed will be refunded or done at home and posted entirely up to the client’s preference.

Romano has been active in the comics industry for many years now and has worked on projects such as Storm, Witchblade, Darkness and Birds of Prey for DC Comics! Currently he is drawing J.ROM – Force of Gold.

Romano will doing sketches (prices displayed at the convention) and selling his very own art book and also original art. There’s a list where you can sign up for a sketch and you can then come and collect your sketch later on during the day.

Always in a good mood, always making gorgeous drawings and often working very late until everyone else has left the convention, Romano is simply a force of comics art to reckon with.

Romano will also be promoting his newest work J.ROM – Force of Gold together with writer Bruno De Roover. The both of them will do a signing session from 10h30 until 13h00 at the Archonia booth.
So get your copy of J.ROM #1 or the fresh of the presses J.ROM #2 signed by both the artist and the writer! If you buy J.ROM #2 at our booth, you will receive a free poster of the cover art! (limited to 50 pieces)

As you can see, the Archonia booth will be well worth a visit at Antwerp Convention 2015! Just enter the hall, turn left and come say hi!