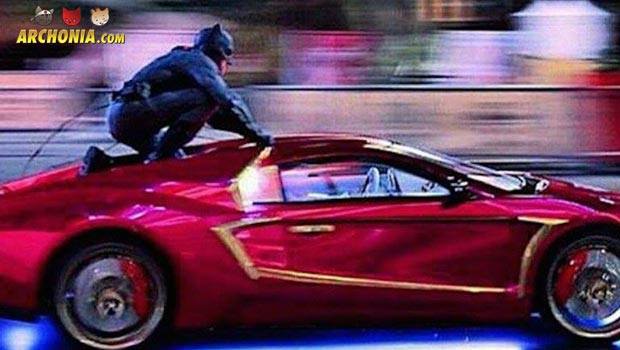 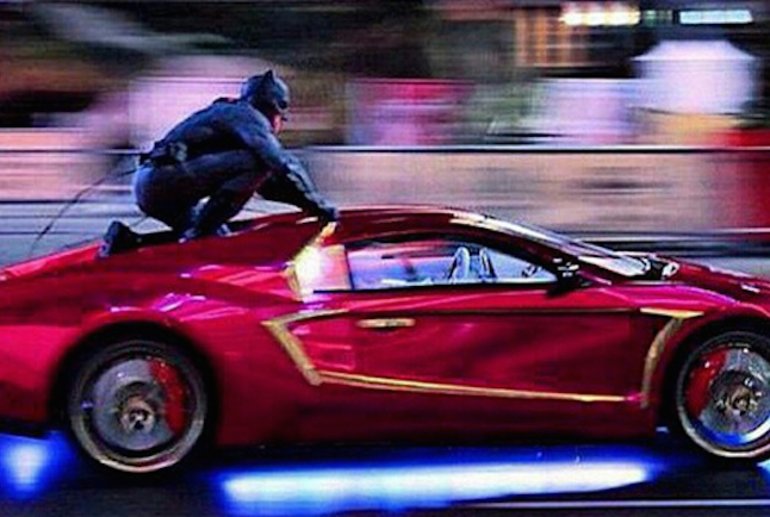 Following up on last weeks news of the Batmobile chasing down Joker’s car, we got pictures and videos of Batman himself making the jump on Joker’s pink lambo and trying to stop the madman on his drive through Gotham! Pretty awesome stuff, in my opinion! The Batsuit looks perfect ,especially if you remind yourself that this is probably the less detailed/polished version as a stunt-suit. 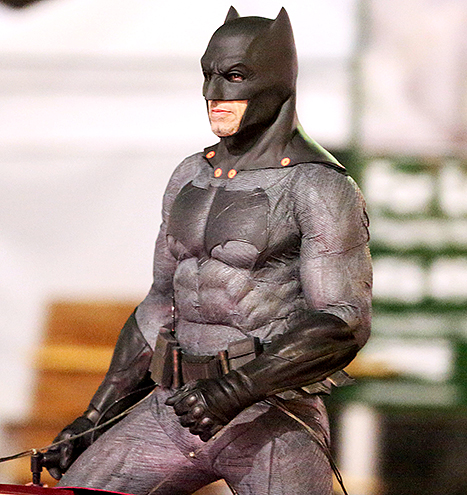 The cape will be added via CGI afterwards to either keep the stuntman safe, or maybe just to have a cooler looking cape. Margot Robbie was also in the car as Harley Quinn, while the Joker was played by a stuntdriver of course.
Director David Ayer tweeted yesterday that **the crew survived the experience of shooting on the streets and is now going to go dark **and head into the studio sets to film the remainder of the movie. He also said that we still have only seen a tiny percentage of the movie in those photos and that there will be plenty surprises left when Suicide Squad opens in August 2016.
ICANNOTWAIT! 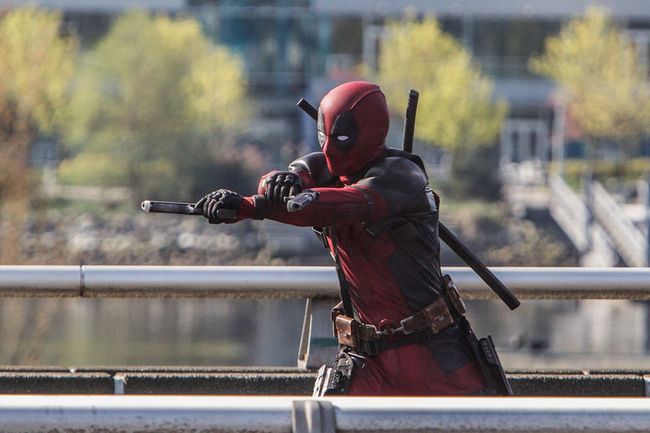 The upcoming Deadpool movie starring Ryan Reynolds as the merc with the mouth has finished shooting a few days ago, as the actor confirmed via twitter. Like Suicide Squad this was a movie where we were able to see a lot of set pictures and footage of the shoot, which makes for an interesting look behind the scenes of modern blockbuster filming.
From what we could glimpse of the movie so far it looks like this is absolutely on track to make up for the atrocious Deadpool in the Wolverine Origins film. It is also the first X-men franchise film thats going to be rated R and the only mainstream superhero film with that rating since 2009′s Watchmen.

Not really a news item, but absolutely worth spreading around even in our geekly news: the geniuses of bad lip reading on youtube have turned the Avengers into something truly special. Check it out, before you head over to Billy-Bob’s trailer to make some moonshine! YEEEEHAWWWWWWWWW! 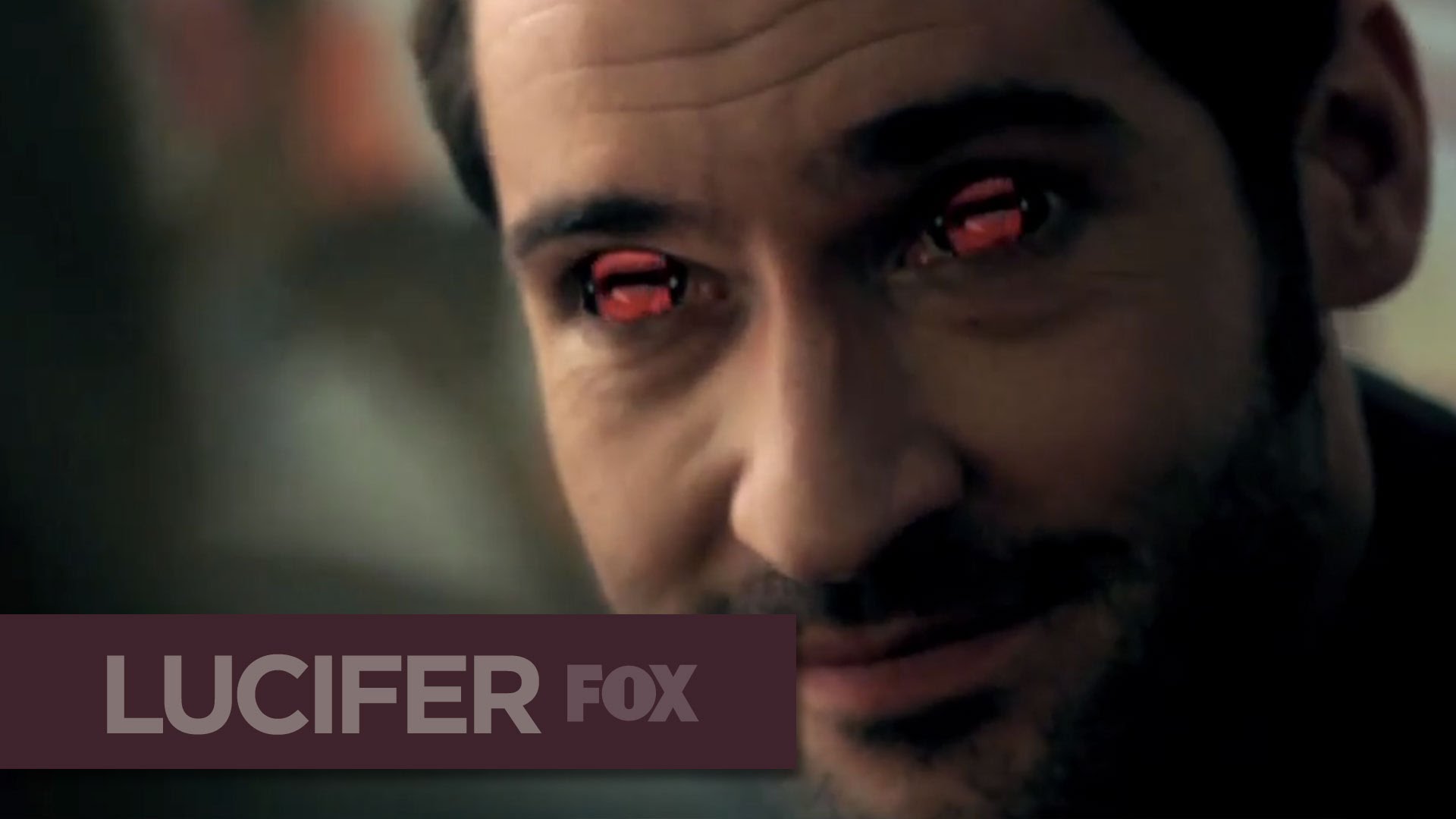 The award for least surprising news of the week goes to upcoming DC TV show Lucifer, which is being protested against by the “One Million Moms” organisation. The organisation which combats “negative influences” on children and grown up alike is afraid of a show that depicts the devil as a likeable guy and protagonist (guess they did not read the comics).
The petition, which already has more than 5000 signatures describes the show as “a new series which will glorify Satan as a caring, likable person in human flesh.”
Naturally I was already trying to become a full blown satanist after only watching the trailer (I sacrificed a whole bunch of bacon only this very morning!), but am now saved from the evil influence of that show, thanks to this very petition.
To be honest here… from the trailer alone the show looked like a very poor adaptation of the DC Comic, but this petition almost makes me want to see it now.
Comic Lucifer creator and all around genius Neil Gaiman had this to say on his blog:
“Ah. It seems like only yesterday (but it was 1991) that the ‘Concerned Mothers of America’ announced that they were boycotting SANDMAN because it contained Lesbian, Gay, Bi and Trans characters. It was Wanda that upset them most: the idea of a Trans Woman in a comic book… They told us they were organising a boycott of SANDMAN, which they would only stop if we wrote to the American Family Association and promised to reform. I wonder if they noticed it didn’t work last time, either…”
Well said.

If you are like me and can’t get enough of (probably) this years best blockbuster Mad Max Fury Road, we have CBR’s exclusive B-Roll footage of the movie for you. You get 18 minutes behind the scenes footage which shows a lot of the epic action shots of the movie from a slightly different perspective.
The new Mad Max is truly one of the best pure action movies of all time (I have seen it three times now and still haven’t had enough) and has a newfound sense of “HOLY CRAP!!! HOW DID THEY DO THAT!?!?” which kinda gets lost in the modern CGI age of movie making. The footage delves into exactly that question. Check it out!
Lets only hope the videogame in September turns out as great as the movie.

The twitter account of the Justice League Mortal documentary has released the first and only glimpses of the failed 2007 George Miller (Mad Max Fury Road) Justice League movie ever onto the internet. It shows a concept of their Aquaman, who even has the solid waterhand (SUB-DIEGO!!!) and a few Wonder Woman related pieces of art! Take a look: 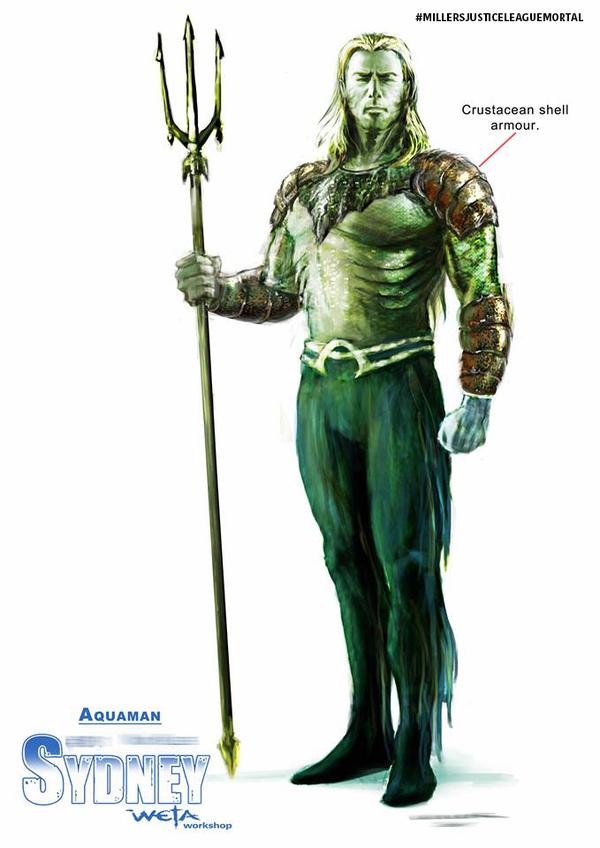 The movie was a planned team up film of DC’s superheroes in 2007, but crashed and burned due to a writers guild strike and Nolan’s Batman being so successful that WB/DC didn’t want to endanger that more realistic version by putting out another Batman in the same time-frame. Seeing what Miller did with Fury Road however makes me a bit sad that he did not get the chance to see this project through to the end. The script is online, for everyone who wants to read it (just google Justice League Mortal Script) and the whole pre- production was finished when funding was pulled (even sets and costumes were already made and screen tested). I really hope to see more of this film when the documentary gets made, which you probably can fund in the coming months as the makers are currently considering a Kickstarter campaign for it.

The upcoming Guardians of the Galaxy TV series has a trailer! Check it out above!
The series will debut somewhere down this summer in the US!
The makers of the animated show also go into some detail on how they approach the Guardians and how it will differ from the team in the movie version after the trailer, so stay until the end.

The latest edition of Rocksteady’s developer diary “Arkham Insider” shows off a lot about the Batmobile in the upcoming game, which will be like a playable character, with its own upgradable skilltree! I am still deep into the Witcher 3, but as soon as Arkham drops that will be over!
For all of you videogame fans, check out our videogame merch store on archonia.com!