All New All Different Marvel Starts In October 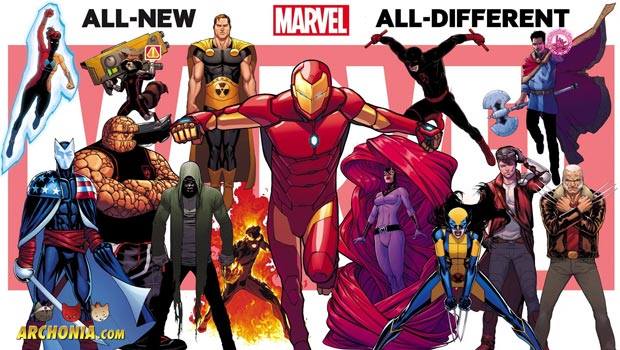 The Marvel universe as we knew it died in Secret Wars. It crashed together with the Ultimate universe in a galactic incursion, exploded and gave birth to a new reality… a new world… Battleworld.
With Doctor Doom as a godlike ruler, Battlewold is the new Marvel universe for this summer, where slices of parallel universes are fused together in a melting pot of different comic book realities. Where a prehistoric looking Steve Rogers fights a horde of Hulks, where Old Man Logan walks alone, where Marvel zombies roam wild and a team of Thors try to enforce some semblance of order. 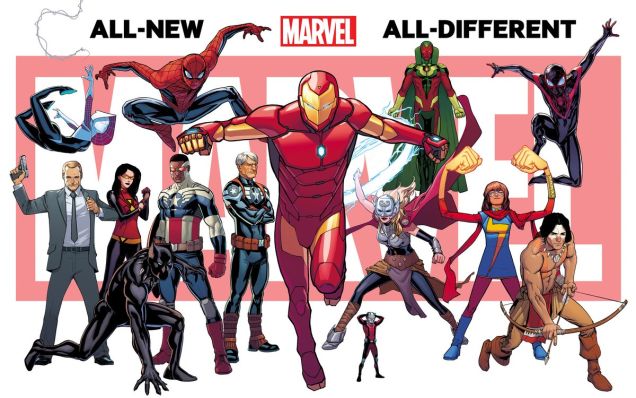 In October, Marvel will start fresh, with their All New All Different initiative. Marvel editor in chief Axel Alonso says it is not a reboot, since the histories of the characters will be intact, so lets call it a refresh for the time being.

Marvel has released a few pictures highlighting the main players for this new Marvel universe and as soon as you look at those, the real reason behind Secret Wars becomes apparent: bringing the coolest and most beloved alternate reality versions of Marvel characters into the main 616 universe and updating other characters to maximise their full potential! It is pretty fair to say that Old Man Logan is one of if not THE best Wolverine story Marvel ever did and now that very version of Logan is part of the main continuity, with endless story opportunities for that character. It is the same thing with the Miles Morales Spider-man. That Daredevil is going to look much closer to his Netflix TV show counterpart is no accident either, but the biggest change is going to focus on Iron Man himself. 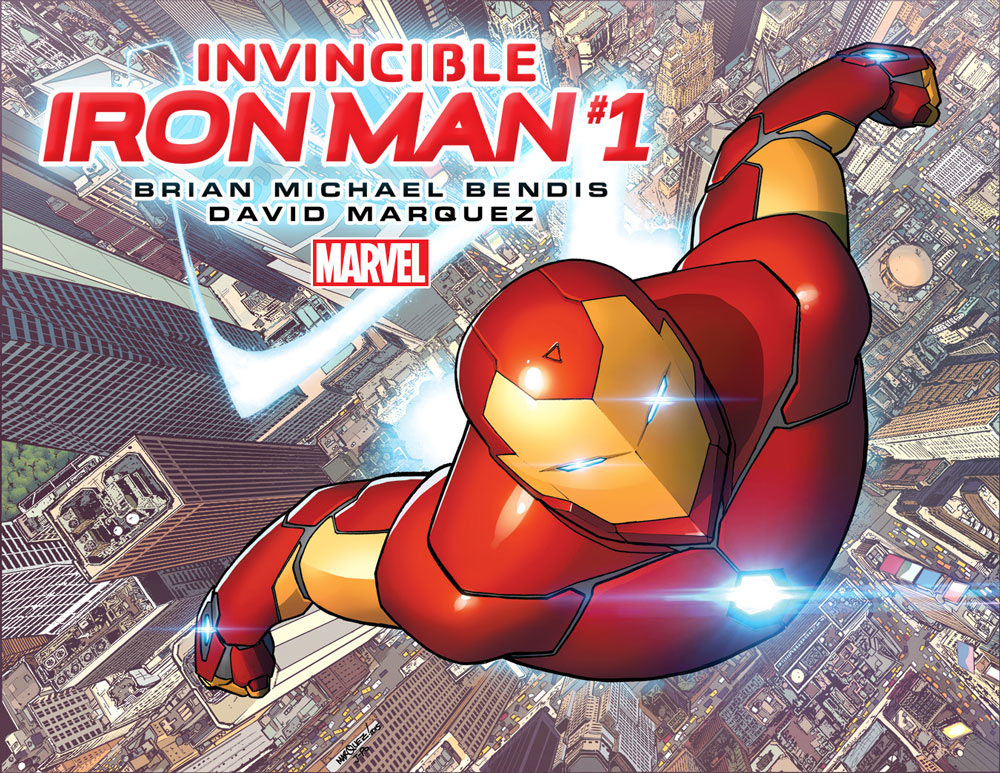 The guys at Marvel are going to push old shellhead as hard as never before, because they want his comic version to match the RDJ movie version in importance and brand factor. You can already see that on the teaser pictures for the new Marvel, as both feature Iron Man smack dab in the middle and in the forefront of the rest of the characters. When you talk to any movie goer and ask them who is the top guy in Marvel movies, 99% will say Tony Stark. Even with the added push from the movies this has never been true in the comics, as Iron Man remained mostly a B-list character when compared to fellow Marvel heroes like Spider-man, Wolverine and even Hulk.
Marvel said that the plan is to turn Iron Man into Marvel’s Mickey Mouse, to bring the comics closer to the way the Marvel movies are seen. To achieve that goal Marvel puts the Ultimate Spider-man team Brian Michael Bendis and David Marquez on the new series “Invincible Iron Man” from issue 1.
Other series (apart from All New All Different Avengers) haven’t been revealed yet, but as you can see there is also a big focus on the Spider-people, with two Spider-men (Peter and Miles) and two Spider-women! Female Thor is still there and gets joined by female Wolverine (X23 in a new costume), which is probably due to the fact that Thor almost never sold better than now. 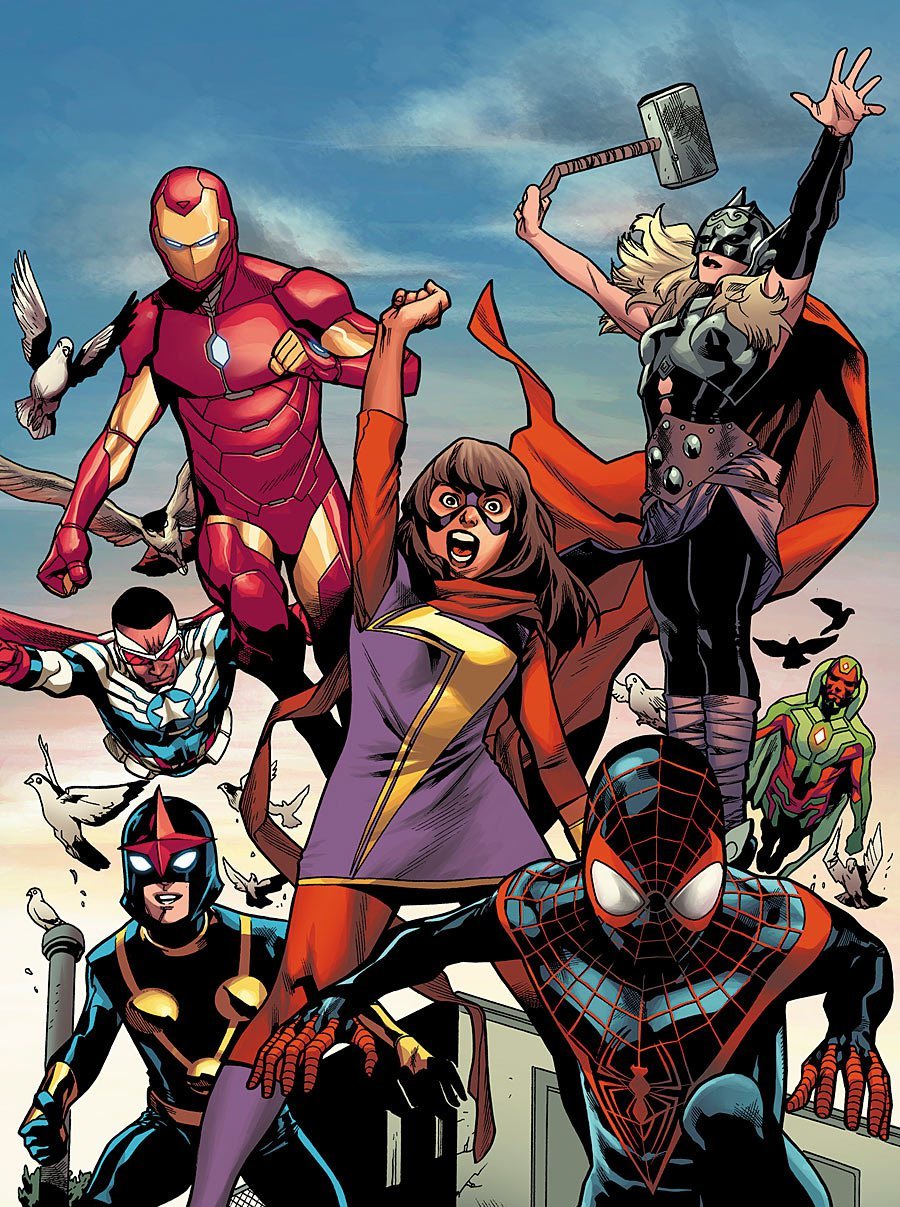 Also apparent is the big focus on the Inhumans, as you can see Medusa, Black Bolt and others feature quite prominently into one of the teaser pictures. Overall it looks like the new direction is highly influenced by Marvel’s movie and TV efforts, which is what also explains Coulson’s appearance, Daredevil’s new costume and the appearance of almost everyone who has a solo movie coming in the next few years (Dr. Strange, Black Panther, Inhumans, Guardians etc.). The X-Men are underrepresented, apart from two Wolverines, as are the F4 (Ben Grimm is now seemingly a part of the Guardians, which lets Marvel use the character without giving free PR to the upcoming Fox movie), which is probably also due to the movie landscape and that Marvel doesn’t hold the film rights to them. It is a smart move, as this makes the new comics more accessible to new readers who might only know those characters from film or TV.

It looks like an exciting new angle to see the Marvel universe from. We will get between 50-60 new series all starting with #1′s, but so far the only one revealed has been Invincible Iron Man, which features a new Iron Man armor that is supposed to be able to transform into other armors at will.
If more teaser drop we will keep you informed on this via the Archonia Blog, so keep your eyes peeled! The new Marvel universe starts this year in October!