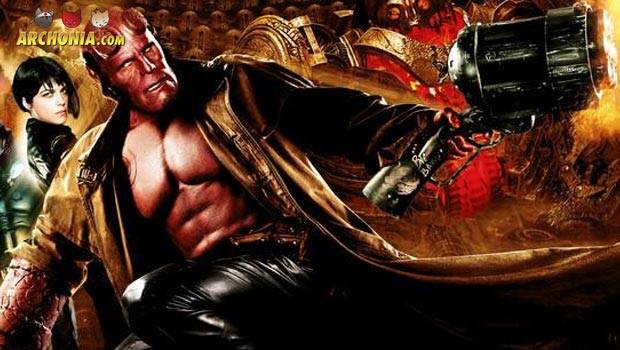 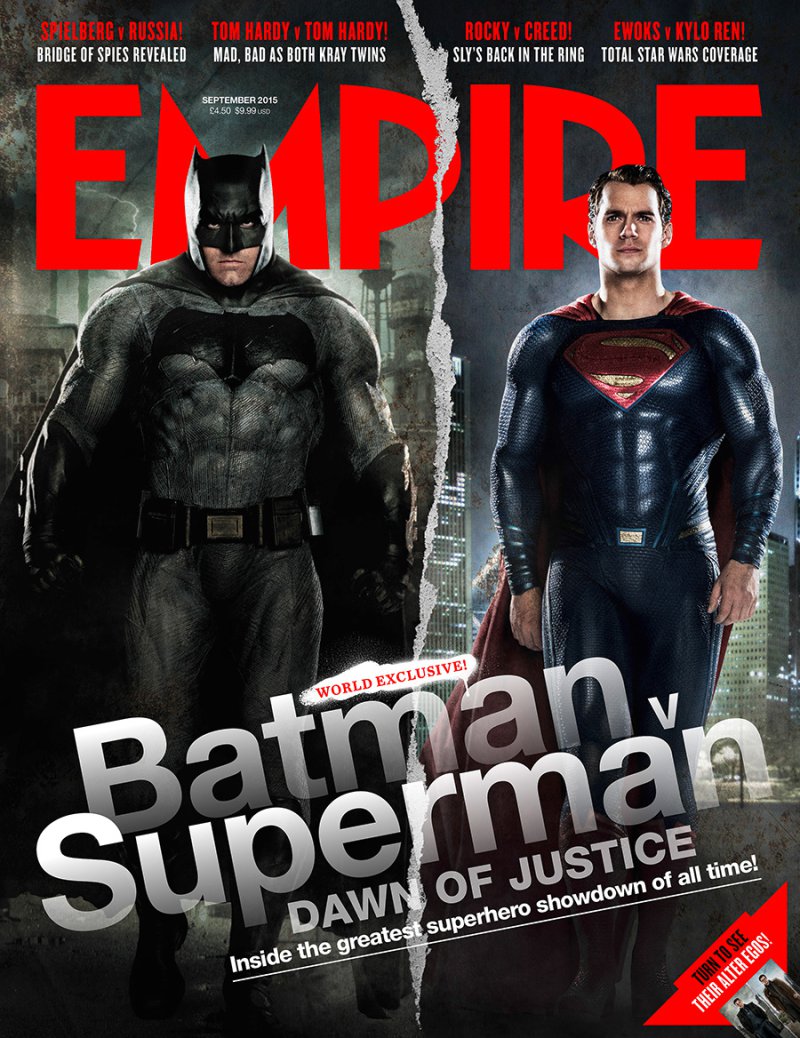 Batman v Superman: Dawn of Justice comes into our theatres in March 2016. After getting the main Entertainment Weekly Cover last month BvS also conquers the September issue of the Empire magazine, which you can see above.
“There is just this gravitas to Batman. He is operatic.” director/producer/franchise overseer Zack Snyder states in the magazine.
And what about Superman? Clark himself, Henry Cavill has an answer:“In this movie, everyone has split into different directions as to how they feel about this alien. Some people love him, some hate him. Other people fear him. Is he a tyrant?”
Snyder also speaks about the upcoming shared DC Comics film universe.
“I want all the other directors of the other films to be able to stretch their legs and do what they want, but at the same time there is a big interconnected universe.”
Sounds good to me. More on the movie and all things DC in Empire’s September issue. 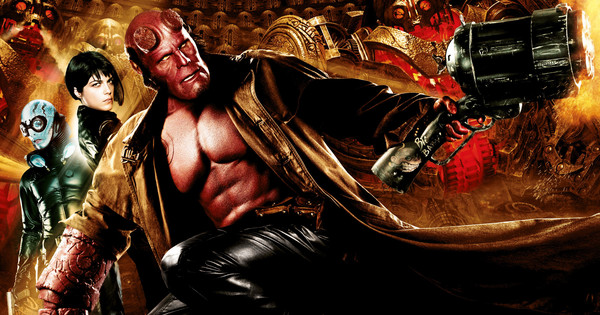 Spinoff Online, a subdivision of CBR, recently had the pleasure to interview Ron Perlman for his new movie Hand of God. They also talked to him about Hellboy 3, his passion for it and if there is a script in the works at the moment.

Well, no, Guillermo [del Toro] definitely knows almost scene for scene what would happen in the third installment. He designed the saga to be a trilogy, and to have this conclusion that would address the destiny part of “Hellboy,” the nature versus nurture conversation of “Hellboy.” And then he introduces the impending birth of the twins. She’s pregnant with twins at the end of “Hellboy 2.” And then what — no movie?

That’s why I’m on my soapbox. Its because the notion of all those things being finally resolved are rather epic and very theatrical, and would make for a great movie. But it would particularly make for a great movie to the people. We didn’t have the biggest audience of any comic book movie, but the people who came came, and they loved it and invested in it. And my point is we owe them the result, we owe them the conclusion.

Perlman is an awesome dude and as a Hellboy fan of course I hope for a third movie soon. We’ll keep you updated of course on the Archonia blog! 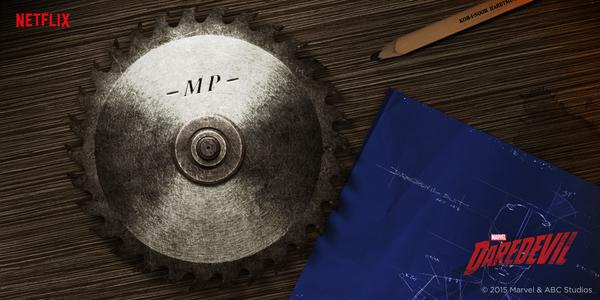 The official Daredevil Twitter account tweeted out this picture a few days ago. As every Daredevil fan can see, we are getting teased with Melvin Potter’s transformation into the supervillain Gladiator from the comics. We already saw Melvin in season one, as he was the guy who made Matt his devil suit. Keen eyed fans already saw his circular saw blades in the episode and even spied a piece of cloth that sported the Gladiators logo, so this is not a totally surprising, but still exciting bit of news. Daredevil season 2 is shooting in NYC at the moment and will feature the return of the main cast, plus Jon Bernthal’s Punisher, plus Elektra, plus the Gladiator.

“Doug Petrie and Mark Ramirez, the co-showrunners, have concocted an amazing series, an amazing season this year and believe me, sparks will fly and it’s going to be pretty phenomenal,” said Marvel CCO Joe Quesada. “We’re so happy to have Jon Bernthal because we have such a world-class cast on Daredevil; we have a world-class actor in Charlie Cox that we want to make sure we chose and were able to attain an actor who is on that same level so I think the combination of seeing Charlie and John perform those parts on the same screen. It’s going to be epic, absolutely epic.”

The upcoming DC Comics TV show Supergirl just started main production last week. You can get a small sneak peak behind the scenes with the video above. The video below was shot at a special fan screening where the makers of the show and DC Comics invited 400 mothers and daughters to watch the pilot and meet the star of the show. It is a really cool and cute video you definitely should check out, just to see how important and amazing it is that this show will make a lot of female (and also male) viewers very happy! Check it out! 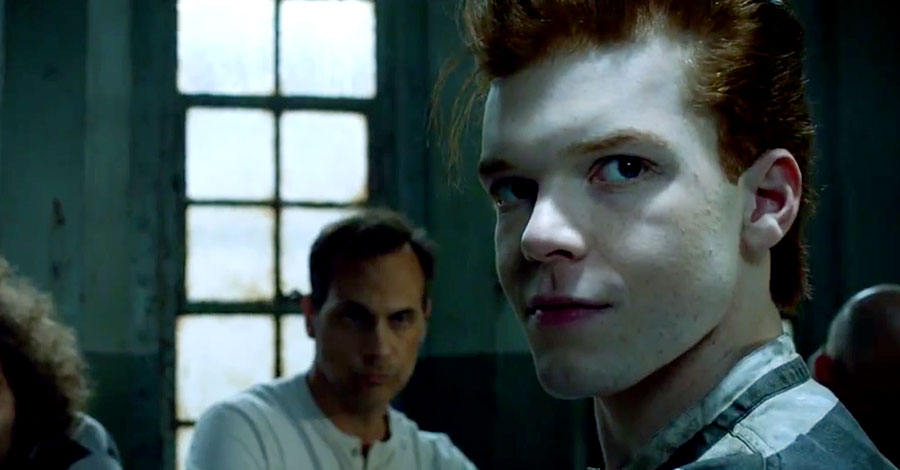 Season 2 of Gotham starts this September. The showrunners unveiled the title for season 2 to be “Rise of the Villains”, which is supposed to show that the proliferation of villany really starts this season, in an interview with CBR.
The picture above shows Cameron Monaghan’s Jerome (if he doesn’t turn out to be Joker I will start riots in the streets. Just so you know) is again part of the show.
Showrunner Bruno Heller: “Well, he’s in Arkham, if that is in fact the Joker. He is in Arkham, where Barbara Kean is put in the first episode, also. It’s in the wing of Arkham where the worst of the worst are kept. An event happens which allows him to be involved in the next few episodes.”

They also teased who else will play a role in the upcoming season and said Mr.Freeze, Azrael, Lucious Fox, Hugo Strange and the Calender Man are contenders for more appearances. To tide you over until the season starts check out the promo’s below:

X-Men director Bryan Singer talked to Yahoo movies about the X-Men franchise and even talked a bit about the crossover possibilities with the Fantastic Four, which are like the X-Men not Marvel owned but a Fox studio property.

“There are those ideas in play. That would be a natural match-up because they’re both ensemble films and there is a mechanism by which to do it. We have to see how the films turn out — how this film turns out, how ‘Fantastic Four’ plays, to really understand what kind of desire and how that would really work. I think to just say you’re gonna do it is a mistake. You have to see how the films evolve before you make the decision to completely commit to that.”

With Mulder and Scully returning to the TV screens soon, Fox released a new short teaser for the show. You can check it out above.
While it is undoubtedly on the short side, I can’t do anything but get excited for this. X-Files was maybe the most important show for me growing up …you know, the one thing you are fascinated by but waaaaay too young for, so you have to watch it in stealth mode that your parents don’t freak out? Thats was X-Files for me. I doubt they will recapture the magic more than 20 years later, but I will watch to find out. Are you excited as well?