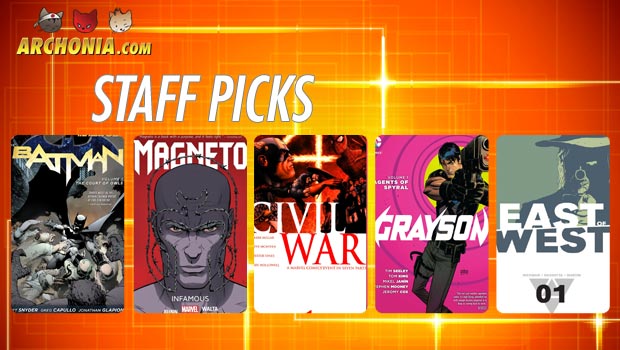 Today we bring you the second instalment of our Comic Staff Picks on the Archonia Blog. In our Comic Staff Picks we will pick 4 essential Graphic Novels we think should be on your radar. Those picks might be fresh out the week we post, they might be lesser known classics you can get right now in our store at Archonia.com, but either way, this is what you should not miss. Marvel Comics, DC Comics, Image, Dark Horse and on and on. Let’s go! 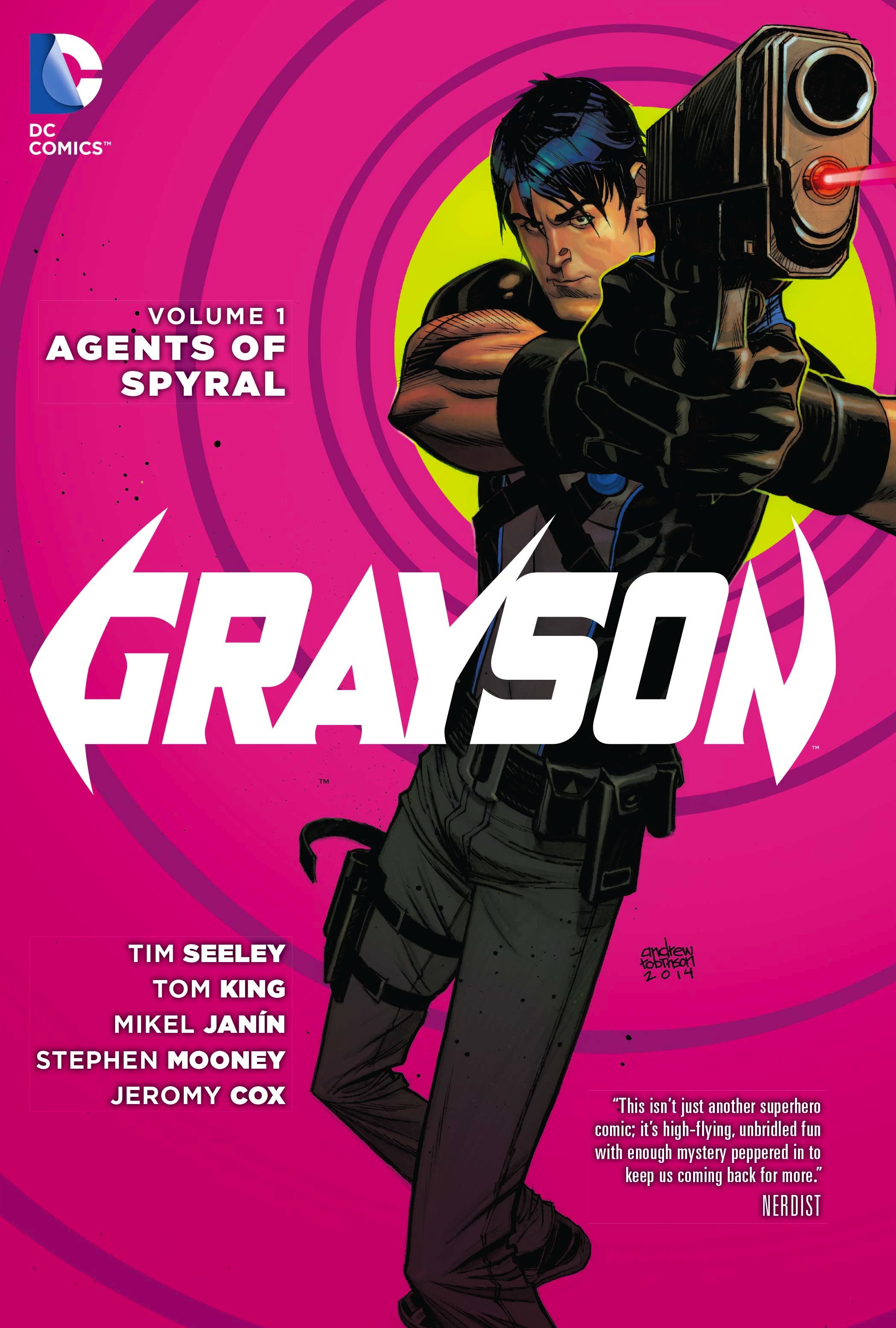 Our first pick this week comes from DC Comics and represents a fresh start for Richard “Dick” Grayson, the first Robin! Dick has been a very special character from the beginning and that hasn’t changed in the 75 years he has been around. One of the only superhero characters who actually evolved all the time, Dick moved from the teenager position of Robin, to Nightwing in the 80s, then made good on his promise to Bruce to uphold his legacy when he took over the cape and cowl and became Batman for several years in the 00s! Now, his life changes again, as he goes undercover into a maybe-maybe-not evil spy organisation, called Spyral! Batman needs to find out more about Spyral, so after Dick Grayson and Nightwing were thought to be dead, Bruce gives Dick the job to play double agent and the start of this you can read in this very hardcover! It is a great read for Nightwing fans (because Dick is still Dick as you know and love him, even as a spy) and newcomers alike, since it does build on the characters history, while also presenting a fresh start to the story! The art by Mikel Janin is also absolutely stunning and acrobatic, which fits the character to a T. Tim Seeley’s writing seals the deal, with a spot on characterisation of Dick and the other agents of Spyral. 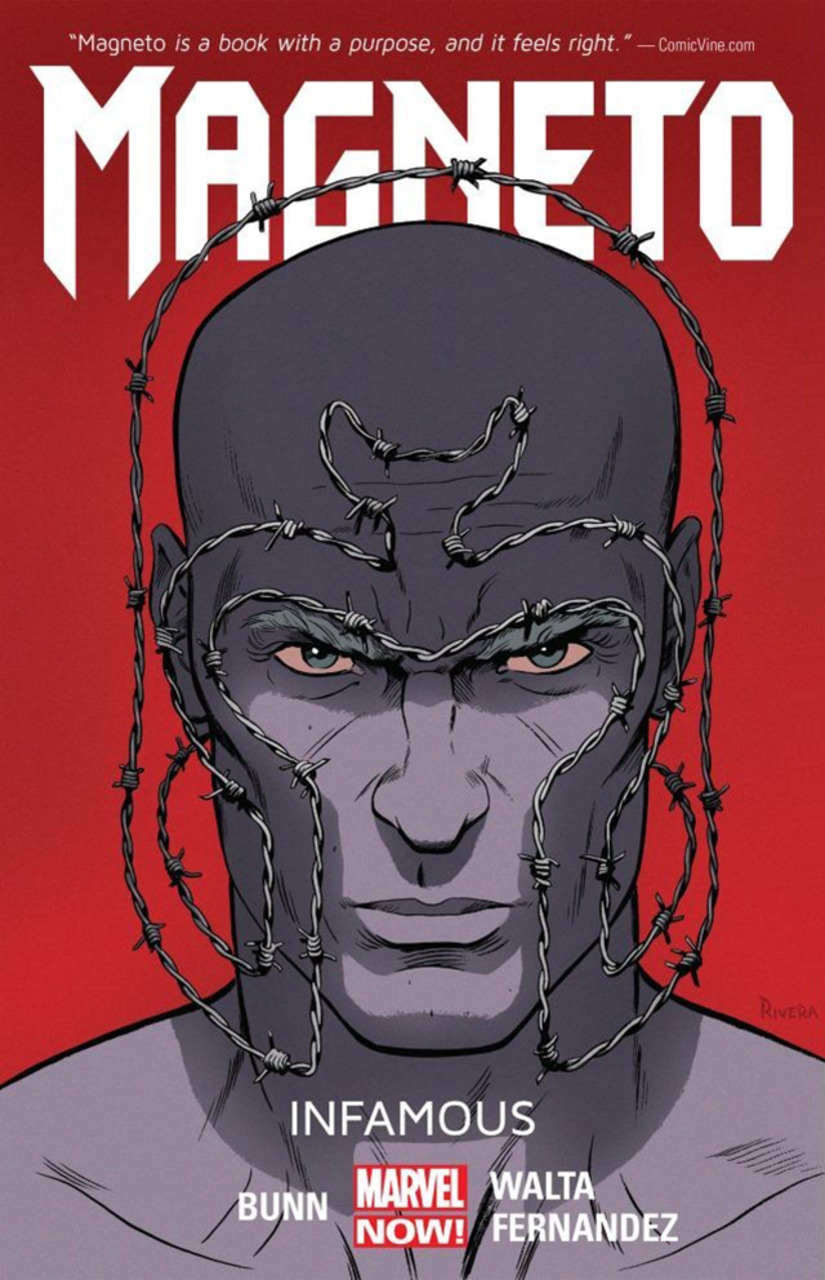 Number two of this week comes from Marvel. The X-Men corner of the Marvel universe to be exact! If you think about the very best villains of Marvel comics, I am sure Magneto will be in the top 3 of most peoples minds. For some he might even be among the top 3 best Marvel characters, period. Magneto has been a lot of things in his life, but pretty recently he joined up with the X-Men and even became an important part of the Uncanny X-Men team. Now we see the ex-villain in a new role: anti-hero/vigilante. You heard that right. This series, written perfectly by Cullen Bunn, takes Magneto and puts him on the crusade to fight against race crimes towards the mutant community… where the end justifies all the means. His powers are weakened, but he is gonna make sure the mutant haters remember why the whole world used to fear his name.
But even more interesting than seeing how Eric dishes out his own unique brand of justice, is seeing how government agency SHIELD is trying to stop him and how he is going to react to that interference! Seriously… if the word X-Men, vigilante justice and gritty storytelling make you tingle with joy, this series is a must read! One of the best solo X-Men books of all time! 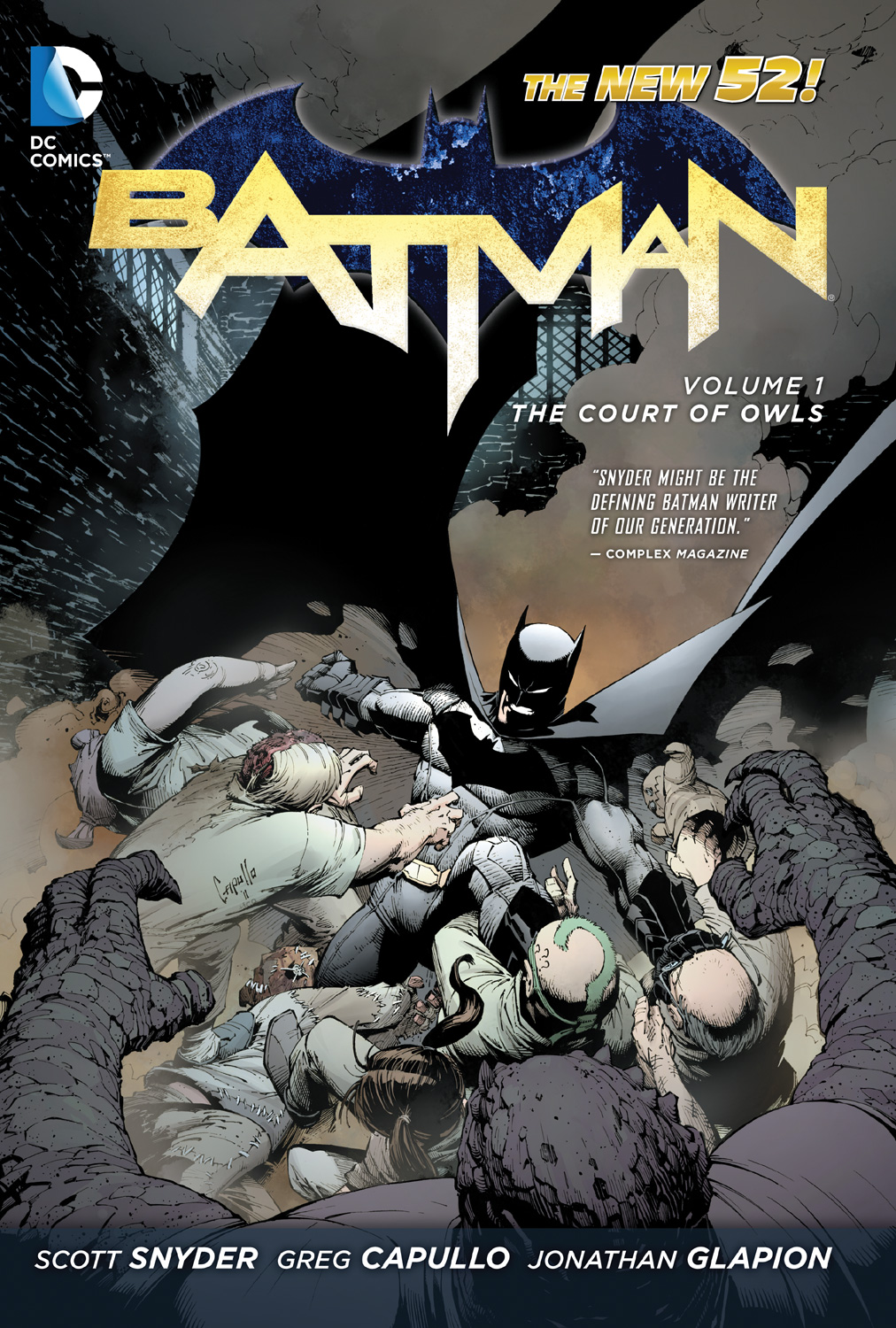 Batman The Court of Owls is the first Batman story that came out of DC’s New 52 reboot. It presents an updated and younger version of Batman, which is perfect for old fans and newbies at the same time! This story is about Bruce Wayne realising that he doesn’t know “his” city as good as he thought he did. There has been a legend, a bedtime story going around in Gotham for hundreds of years… about the Court of Owls, which is controlling Gotham as a secret society… who sends the talon for your head if you aren’t a good little boy. As Batman dives deeper and deeper into a murder mystery, he has to find out that some bed time stories are a lot more real than you would like them to be!
Equal parts superhero action book, horror, mystery and detective fiction, this is a Batman story for the ages! Guest appearances by a lot of Batman allies and enemies and a new threat which is so awesomely introduced and depicted that it is clear to be a new classic among bat-villains, this book cannot be missed! Scott Snyder brings his unique horror like take on Batman, while Greg Capullo does big, bold, muscular art, that is still very dark and creepy at the same time. 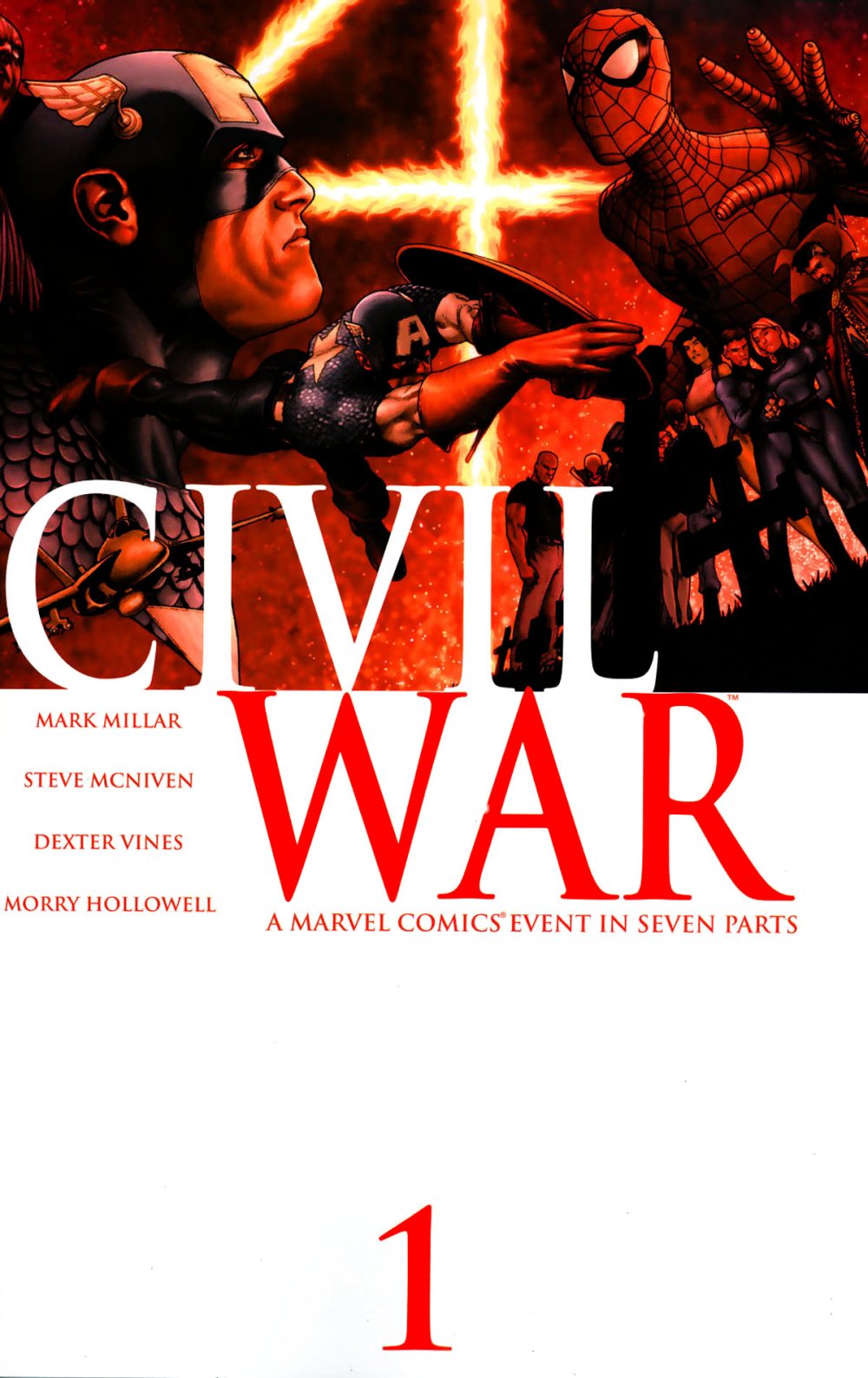 Marvel’s Civil War is still one of the most important events that ever happened in the Marvel universe and also one of the best crossover books the company has ever done! Influencing the next Captain America movie, this comic is a must read before next April, which is when Captain America: Civil War will drop into our theatres.
After a televised superhero fight goes terribly wrong, the world wants superheroes to be held responsible for their actions and the collateral damage that sometimes happens when they fight against crime or supervillains. The american government decides to put in a superhuman registration law, which forces all superpowered people on US soil to register with the government and give up their secret identities, or be regarded as an enemy of the state. This gigantic news splits the superhero community in two camps: a pro-registration camp, led by Tony Stark (who already works with the government and doesn’t have a secret identity) and a anti-registration camp, led by Steve Rogers (who, even when he is in the same position as Tony, thinks that the heroes should be independent from the government. Mark Millar and Steve McNiven chronicle in an action blockbuster like few you have seen before, what happens when allegiances get tested and friendships destroyed. Seriously, this storyline still influences new stories from Marvel today, even almost ten years after it originally came out. A must read for Marvel fans! 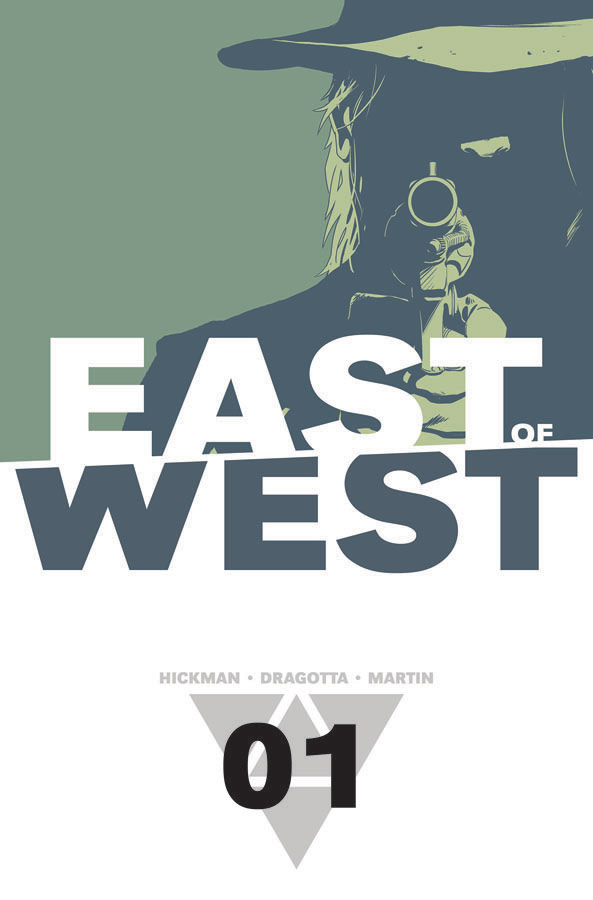 East of West is a western/sci-fi epic brought to you by the talented guys at Image Comics and Jonathan Hickman/Nick Dragotta! It is about a fictionalised, dystopian version of the United States of America, in which the apocalypse is is not a mythological idea, but an actual event that is about to start. How does the apocalypse start? Like it usually does… with the appearance of the four horsemen of the apocalypse: War, Famine, Conquest and… well, thats kinda it. Death has left his three siblings behind and lives among the mortals as a fully dressed in white version of a Clint Eastwood like sci-fi gunslinger, who has a few things to say about the apocalypse!
This book isn’t only rich in action and amazing sci-fi concepts and technology, but Hickman also crafted a fully realised world filled with different believes, tribes and nations, who are all in bed or war with one another. One of the best books coming from Image!