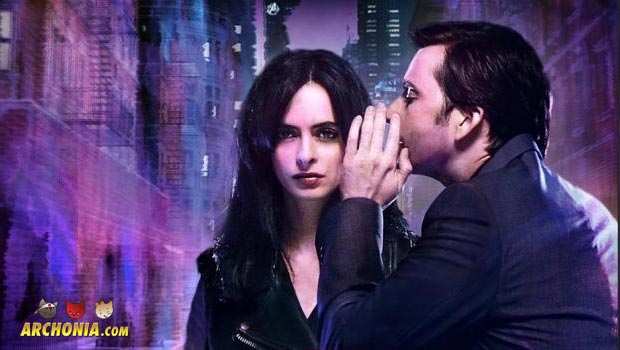 Jessica Jones launched on Netflix last Friday and has achieved critical success all around. The second Netflix/Marvel show, following on the heels of Daredevil this April, Marvel’s Jessica Jones is also our second dive into the MCU’s Hell Kitchen NYC! It introduces a whole row of Marvel street level characters, while also confirming the question on a lot of more casual Marvel fans minds that Jessica is indeed a character that deserves her own show, even before Luke Cage and Iron Fist!
Don’t worry, this review is spoiler free and for the whole first season of Marvel’s Jessica Jones. 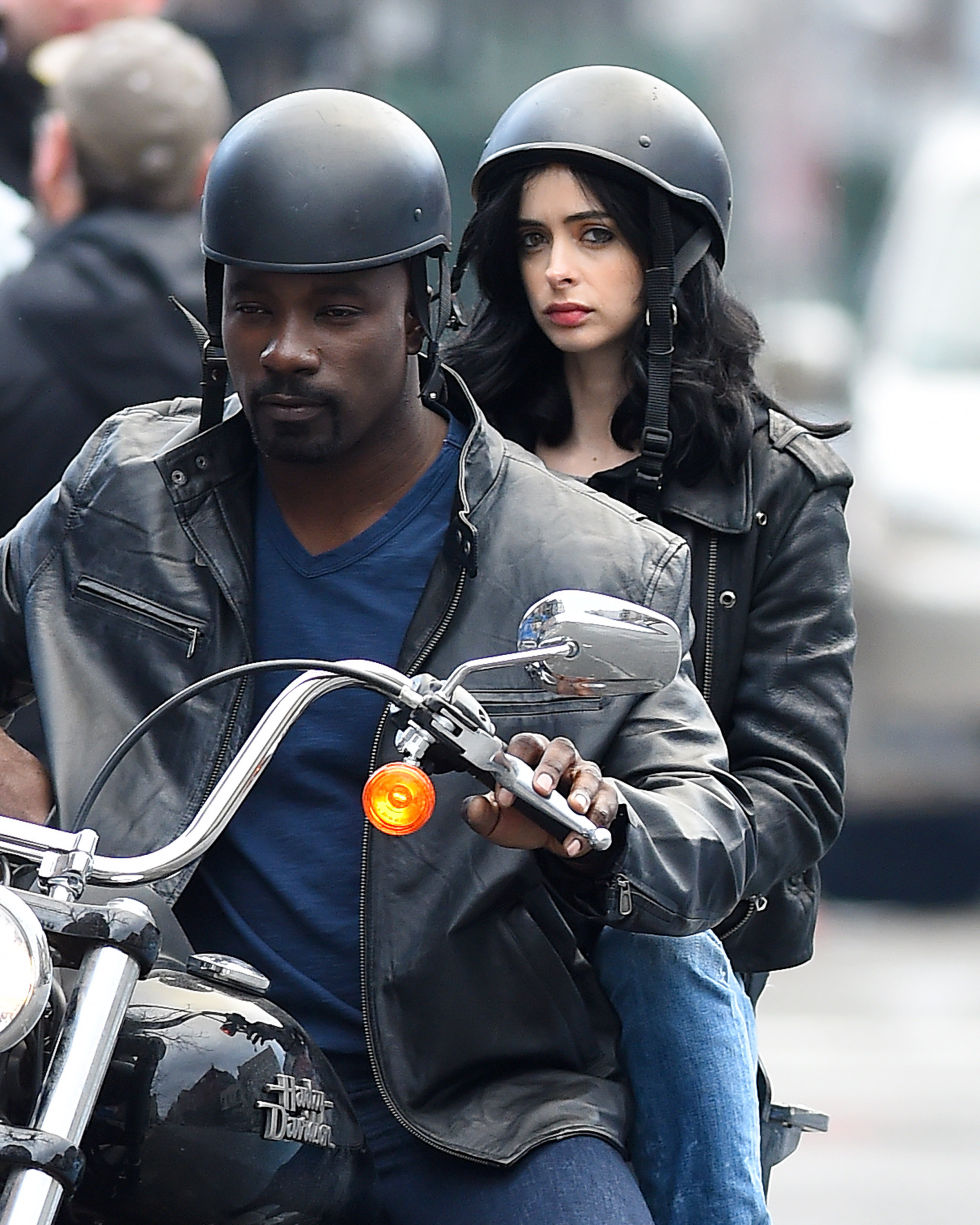 Would you put day drinking under experience or special abilities?

Jessica Jones is about a super powered person in the Marvel universe, who isn’t a superhero, but who still tries to make a difference. The whole show is a very dark, noir-ish detective show, with a super strong female lead and one of Marvel’s only truly terrifying villains in live action.
Jessica is someone who is down on her luck. She seems haunted by her past and spends most of her time wasting her considerable abilities (and private detective’s license) to catch cheating husbands and wifes in the act. That all changes when a nightmare from her past named Kilgrave slowly shows his influence all around her and her clients. From then on the show is a dark and disturbing look at a failed hero, who tries her best to not be a failed person and the demon than haunts her dreams and life. It’s a show about control, trust and abuse. This is not popcorn entertainment.
As it was the case with Daredevil, the actors in this are on fire. Krysten Ritter as Jessica Jones is a perfect lead, combining a very gritty sexyness that isn’t oversexualised at the same time with a believable hard edge toughness, but still very charming and relatable overall. She is not alone though, as we all know, a dramatic story about a hero is only as good as its villain… and what a villain Jessica Jones gets, in David Tennant’s Kilgrave (known in the comics as the Purple Man)! Kilgrave is a so called “gifted” who has the ability to control peoples minds with his voice and Tennant nails the performance of this very dark and almost disgusting character. His Kilgrave is only a shadow in the show for about the first few episodes and the way they tease him, with purple lights flickering in the background or purple shading of different scenes when he gets referenced or his nefarious influence is being felt, is absolutely perfect. When he makes his way into the foreground, it’s amazing how his charms make you almost wanting to like him, just before he does something utterly horrible again. The way he uses his powers opens up a whole new door for how mind control is being thought of in live action. For the first time ever, it really got the point across that mind control would be probably the most terrifying power a person could have and the show really goes for it to get that point across. It truly is absolute power that corrupts absolutely.
A scene in a police station or later on in a bar are scary reminders of how terrifying a person with that power could actually be in real life and brings questions about control and rape to the forefront of the viewers mind.
Overall Kilgrave is easily in the contention for Marvel’s best villain yet, locked in a tight 3 way battle with Vincent D’Onofrio’s Kingpin and Tom Hiddleston’s Loki, as his motives are deeply personal and horrible, but very well drawn and explained. He knows he is bad, but since for him other people aren’t more than playthings it doesn’t really matter.
Those two aren’t the only Marvel heavy hitters introduced here, as we also get our first look at New Avenger Luke Cage, played by Mike Colter. Cage, a super strong result of an experiment with unbreakable skin, is going to get his own Netflix show after Daredevil season 2, so it was kinda surprising that they introduced him in Jessica Jones, but it has been a great choice. Their character’s paths have been interlinked in the comics for over a decade now, so it makes sense and gives us one of the most interesting relationships in the show. With his own power set he also makes a great asset for some of the action scenes of the show. 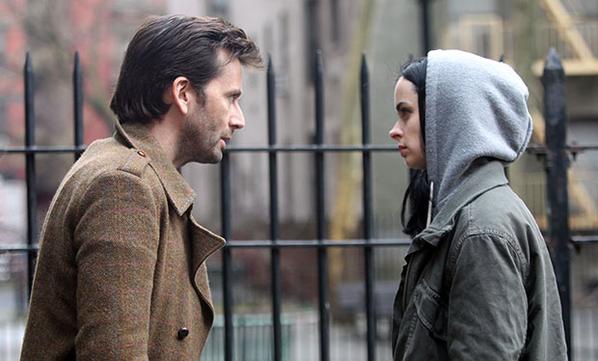 The other actors are all great in their roles as well, like Rachael Taylor as famous talk show host Trish “Patsy” Walker (destined to become superhero Hellcat) who is Jessica’s childhood friend and almost sister, or Eka Darville who gives us an amazing performance as Jessica’s drug abusing neighbor Malcom, who might even be the emotional heart of the show.
Tonally Jessica Jones is very close to Daredevil, but might even go further into the darkness, as Marvel’s darkest, goriest and most sexual live action story yet, so nothing you will should with your Avengers crazed kids! Especially the amount of bloody violence and gore in later episodes really caught me off guard (it’s seriously not far away from Game of Thrones levels sometimes), but it fits the dark story they wanna tell. Even dark themes like rape get approached, so this is not a normal superhero show, but a true noir detective story, just with superpowered elements thrown in. Action wise we get less here than in Daredevil, but the fights are still very good when they happen, even if not quite as breathtaking as in Daredevil. It also sometimes felt like the producers were unsure themselves how strong certain characters are, as power levels seemed to fluctuate from time to time.
The cinematography delivers a stunning image of grimy Hell’s Kitchen and is actually a lot more cinematic than any of the Marvel movies that are being show on the big screen, which is praise for the movie-esque looking Netflix show and at the same time a little dig at the rather TV like Marvel movies.
As far as interconnectivity with Daredevil goes, I am afraid I and the show have to disappoint you. There is no Matt Murdock or Hornhead cameo in here, which I want to get out simply because I kinda waited for it every episode and was a little bit let down that it did not happen. Still, this is clearly the same Hell’ Kitchen and a character from Daredevil’s life actually cameos and references Matt, so that’s something. 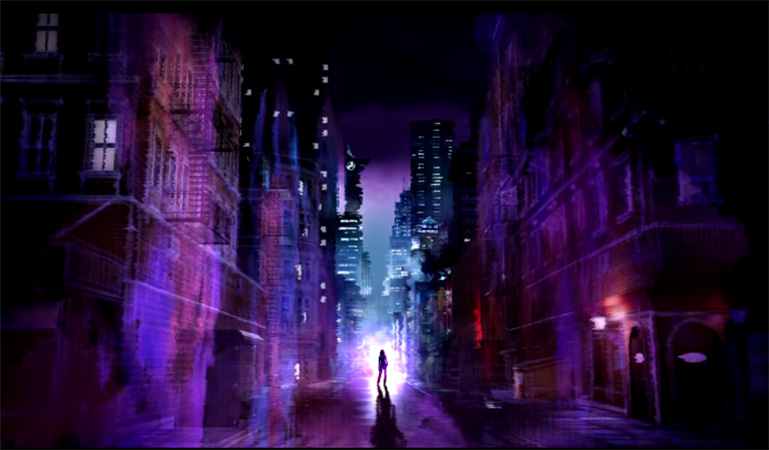 The relationship between Marvel Studios (or Marvel TV) and Netflix has shown for the second time that this is the place for Marvel to truly shine. A much better looking, more thrilling and more daring experience than any Marvel movie this year, Jessica Jones joins Daredevil on the top of the Marvel live action food chain. Both shows are in fact so good, that they start to harm the movies a little bit in my eyes. Sure, the Netflix shows have a leg up already as they aren’t supposed to generate toy sales and hit a audience that is trying to encapsulate everyone, but it still makes me yearn for more grown up takes on Marvel characters. So, while everyone is already chomping at the bit after seeing the first trailer for Civil War, I am over here, waiting for the next Daredevil and Jessica Jones season.