This week in the Geekly we look at the planned Supergirl movie, more info on Venom and the Predator, plus bad news for Guardians of the Galaxy fans!

The newest Predator movie, directed by Shane Black (Kiss Kiss Bang Bang, Iron Man 3) is almost upon us, so feast your eyes on the new featurette, which goes a little bit deeper into what Predator fans can expect later this September!

Shane Black also talked a bit about the film to MovieWeb and had this to say.

"After 30 years of Predator movies, it's the right time to resurrect the franchise. I'm blessed to have the opportunity to play in that sandbox. We love growing this thing. We're trying to encompass, in one movie, all the genre things that we love."

I actually kinda liked all the Predator sequels, even the much maligned last one... so I am interested in what the newest film can bring new to the table. We will see in mid September.

From the outer reaches of space to the small-town streets of suburbia, the hunt comes home in Shane Black’s explosive reinvention of the Predator series. Now, the universe’s most lethal hunters are stronger, smarter and deadlier than ever before, having genetically upgraded themselves with DNA from other species. When a young boy accidentally triggers their return to Earth, only a ragtag crew of ex-soldiers and a disgruntled science teacher can prevent the end of the human race.

Guardians of the Galaxy vol.3 On Hold

After the much talked about firing of James Gunn, after a series of almost a decade old jokes on Twitter, everybody has been wondering what would happen to Guardians vol.3, which was supposed to start filming, off a script of James Gunn, at the end of this year.
Now, according to sources of the Hollywood Reporter, Marvel Studios has put the third Guardians film on hold indefinitely, to figure out how to proceed. What director to hire, if they wanna use Gunn's script or start from scratch (Drax actor Dave Bautista already said on Twitter that he would not return if Disney ends up tossing Gunn's script out as well).

Overall I don't think Guardians fans need to worry too much, as the Guardians are clearly a top priority for Marvel, so I am sure something will be announced at the very least during next year. According to several sources there has been a meeting between Marvel Studios and Taika Waititi (Thor Ragnarok's director), so maybe he could be the replacement.

According to Deadline a Supergirl movie is now in development at WB and DC Films. The movie is supposedly a high priority and the studio is looking to hire a female director to helm the film. Current frontrunner is Reed Morano, who directed The Handmaids Tale.
According to rumors DC now wants to focus a lot more on female led superhero movies, as they two biggest successes were the Wonder Woman film and the Harley Quinn led Suicide Squad. It is also a way to sidestep the rumored ongoing money arguments with Henry Cavill, who wants a pay raise after being in the very successful Mission Impossible Fallout.

I really feel DC is overthinking things, as usual... as most people really want to see another Superman movie instead and nobody really clamores for a Supergirl film, especially as the character has her own live action TV show at the moment. It would also make a lot more sense to introduce Supergirl in a Superman movie first and then spin her off, if people take a liking to her. I really don't think this sounds like a good idea... but maybe thats just me beings cared to never see Cavill as Superman in a solo movie again. I really, REALLY like his Superman. 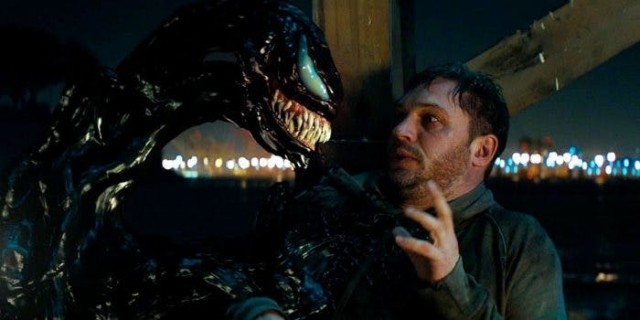 In the recent issue of Total Film magazine, the upcoming Venom film received the spotlight and a few interesting things were revealed.
For example Tom Hardy revealed that he wasn't really a Venom fan before being cast in the film.

"I'm not going to lie, I just thought he was a black Spider-Man. I didn't really read comic books, so my information was limited. But I was given loads of comics when I got involved. All the comics! And more importantly, I had my son as my guide. I was versed in the way of Venom by a 10-year-old. I consulted the oracle, there. And he would steer me on."

"For me, it was the multiple personalities, because to play that, on a kind of epic level, a superhero level, that was the big draw."

Hardy also seems very game for sequels as the character.

"I'm open to whatever you want to do with it. We've signed up for three of them. So it's very much an open case. We'll see what people's responses are to it. I think it's an awesome character. I love playing both of them. It's an amuse-bouche, and for Sony, it's the Venom-verse launched in isolation, as it were. We all prepped for it to be a standalone universe. So whatever Sony want to attach to it at a later date, it's a fulcrum piece. But let's see what happens when it lands."

He also professed no interest in the ongoing fan wars between DC and Marvel, which is obviously the grown up response, after he played Bane in Dark Knight Rises and now Venom.

"I'm quite mercenary. I'm not a fully paid up member of any group. It's really awesome to have played in both camps. It's a real honour. And I got really cool ones. I got Bane and Venom, and I've got Mad Max as well. I've got some nice cosplay under my belt, some cosplay scalp, as it were..."

Director Ruben Fleischer talked a little bit about the story of the film being influenced by the Lethal Protector arc in the comics, which eagle eyed Archonia customers probably already realised.

"It's very much a pure Venom story, which is something that we've done with this film - try to make it as much Venom's movie as we could. You know, we have limitations in the inception of the movie... And then also the title, Lethal Protector. At that point, Venom has achieved this antihero quality. But he's not just a pure villain. As it says, a lethal protector. So he's a violent vigilante...so he's somewhere in between."

I love Tom Hardy and really enjoy a good Venom story, but the overall Spider-Man-ness of the project still makes me nervous. We will see how this one turns out in October.